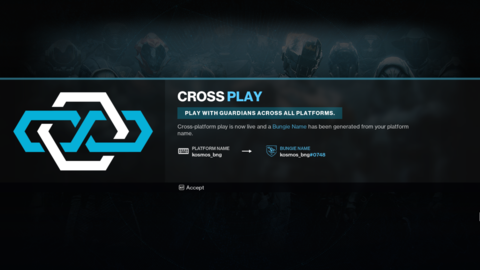 In a This Week At Bungie blog post, the studio laid out information Destiny 2 cross-play. It’s going to be coming in Season 15 between PC, Stadia, PlayStation, and Xbox, and there are a few features included to make it easier to find matches with friends.

With Destiny 2 on so many platforms, you may be wondering what will happen to everyone’s name. Bungie will require all Destiny 2 players to create a “Bungie Name” that will stay the same across all platforms. These Bungie Names will consist of the player’s Bungie Name, display name, and numeric ID.

To make it easier for console friends to search for other players, Bungie will reduce the number of characters used in a Bungie Name. They addressed how some player names on Steam with extended character sets won’t be available. Also, all names will be moderated and filtered to prevent offensive terms. “It is possible that due to removing these characters, players will end up with empty names, or names that result in offensive terms,” Bungie explained. Unfortunately, if players are stuck with an empty or offensive name, they won’t be able to change it at launch and will have to wait a couple of months. Basically, think thrice before creating your Bungie Name.

Along with a Bungie Name, players will have a roster called Bungie Friends which will have all friends in one list. Players can filter their list based on platforms as well. You can even team up with cross-platform clan members. To add friends to Bungie Friends, players will have to search for their friends on their preferred platform and send friend requests. Another way is to search for friends via the Invite screen. Lastly, players can use Bungie’s friend finder site, which will launch when cross-play becomes available, to link their platforms and send Bungie Friend requests. For Fireteam requests, players can open the Roster tab in their menu and search for the players they want to team up with.

Another thing to keep in mind is that voice chat will not be available between platforms when cross-play launches, but Bungie suggests that it will be fixed in an update after launch. Players will have to wait till the winter for text chat on consoles and text input with keyboards.

Bungie is aware of targeted harassment in the community. To keep the community safe, players will be able to block other players and access privacy settings through their Roster menu.

Season 14 will end on August 24. Bungie’s The Witch Queen expansion reveal lands on August 24 as well.