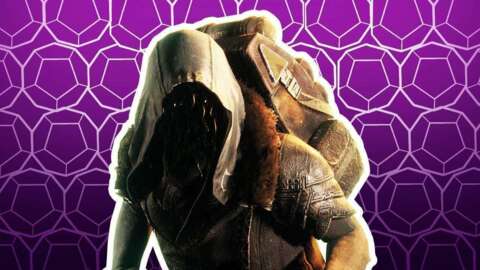 The Season of the Chosen is almost over in Destiny 2, but there’s one last big activity before the game’s next season kicks off: the Guardian Games. Prepare to stomp last year’s winners, the Titans (or gear up for another thrashing if you are a Titan) with new Exotics from Xur this week. Here’s where to find him and what he’s offering.

Head to the Tower, in the Hangar area, to find Xur this week. For his weapon, Xur is offering The Jade Rabbit. Hunters can pick up the Lucky Raspberry chest armor; for Titans, there’s the Ashen Wake guantlets; and for Warlocks, Xur has the Starfire Protocol chest armor.

Spawn in at the central Tower transmat zone and turn left to head down the stairs to the Hangar. At the bottom of those stairs, hang another left and pass under the structure to find a catwalk staircase in the back corner of the area, to the north. Xur is up the stairs a bit, surveying the Last City below.

The gun in Xur’s inventory this week is The Jade Rabbit, a great Crucible scout rifle you should nab if you don’t have one. It has phenomenal range and super-quick firing speed, making it great for taking out players at long ranges before they have a chance to react. If you’re not a fan of his other options, Xur also sells an Exotic engram that will decrypt into an Exotic you don’t already own. He also has the new Xenology Quest, which rewards an Exotic Cipher you can use to purchase Exotics from either Xur or the Tower’s Monument to Lost Lights. The quest requires you to either complete Strikes or win matches in Gambit and the Crucible.

The trick with The Jade Rabbit is to land shots in specific places on your opponents. The fast-firing scout rifle is highly effective in the Crucible because it gains a damage boost when you chain body shots and then follow up with a headshot. What that means is that you want to hit your opponents in the chest at least once before you start landing those critical shots, which will take them out extremely quickly. You also get ammo back if you execute the chain. The Jade Rabbit has been a Crucible favorite for years now, and while hand cannons are currently at the top of the meta, if you need a reliable PvP weapon, this is a great one.

Xur’s armor this week is all about grenades. For Hunters, you can grab Lucky Raspberry, which makes your Arc Bolt grenades more powerful. The grenades send lightning chaining between enemies, and with Lucky Raspberry, that chaining effect is increased. You also get a chance for your grenade to recharge every time it deals damage, and if your grenade maxes out its chaining between enemies, it always recharges–meaning more lightning for you.

Titans get a boost to their Fusion grenades with Ashen Wake. The gauntlets cause your Fusion grenades to explode on impact instead of after a delay, and you get faster grenade throw speed, so you can whip fiery fury at opponents even more quickly. You’ll also get your grenades back more quickly if you kill enemies with them, as Ashen Wake gives you grenade energy for every grenade final blow.

‘A last goodbye to Brandon’: Message in a bottle unites families years after it was set adrift