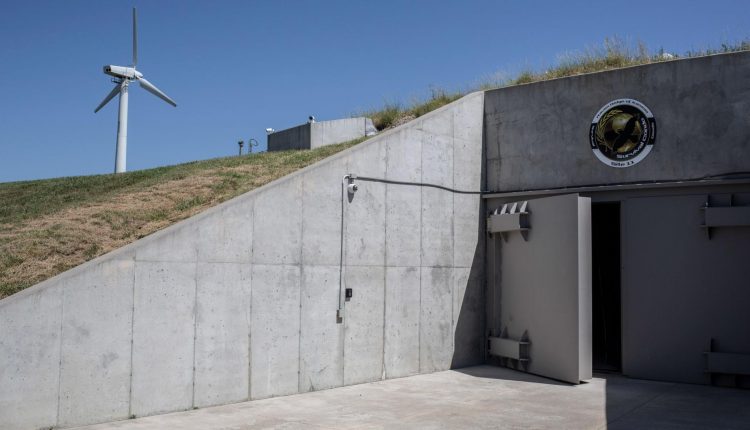 There’s a reason “preppers,” people who plan for the worst-case scenario, like to talk about the zombie apocalypse. The idea of an army of walking dead swarming the country pervades their thoughts because, says Roman Zrazhevskiy, “If you prepare as if a zombie apocalypse is going to happen, you have all the bases covered.” That means: an escape route, medical supplies, a few weeks’ worth of food.

Zrazhevskiy has been thinking about this for decades. He was born in Russia a few months after the nuclear meltdown at Chernobyl. At the dinner table, his family often talked about the disaster and what went wrong. Then, after they relocated to New York, Zrazhevskiy stood on the waterfront outside his Brooklyn high school on September 11, 2001, and watched the World Trade Center towers collapse. Even then, he had a small go-bag prepared with disaster supplies.

Now, he’s the guy who has a kit and a checklist for every occasion, including taking his toddler to the beach. Zrazhevskiy lives in Texas and runs survival outfitters Ready to Go Survival and Mira Safety. In 2019, with protests in Hong Kong, wildfires in Australia, and the threat of war with Iran, business boomed. But when the CDC announced the U.S.’s first confirmed coronavirus case last January, business reached “a whole new level,” says Zrazhevskiy. His companies spent the next couple of months scrambling to fill backorders. The flood of new customers had so many questions that he hired seven full-time staffers just to answer emails. “It’s kind of a customer service nightmare,” he says. “People are really flipping out.”

In a public imagination fueled by reality TV, preppers are lonely survivalists, members of fanatical religious groups, or even wealthy Silicon Valley moguls who buy luxury underground bunkers and keep a getaway helicopter fueled. But in reality preppers range from New Yorkers with extra boxes of canned goods squeezed in their studio apartments to wilderness experts with fully stocked bunkers.

Eight months into the coronavirus pandemic, something has shifted in our collective psyche as we remember empty aisles and medical supply shortages. Firearm sales are up, bread baking and canning are trendy, and toilet paper stockpiles are common. Are we all preppers now?

The coronavirus pandemic is the epitome of what preppers call a “s*** hits the fan” event. As the country braced for lockdowns and began seeing shortages of crucial supplies last March, people found themselves woefully unprepared. But there was a time in American history when many more civilians were ready for disaster.

In 1979, when Alex Bitterman was in second grade, Sister Mary Jane gathered her students in the gym of their Catholic school. In front of her sat a three-foot-tall gray barrel and she asked the students to guess what was inside. A clown, they thought. Or snakes? The nun opened it and pulled out a wool blanket, a plastic water container, and a large tin of saltines. These items would save them, she said, if the Soviet Union dropped a nuclear bomb on the town of Cheektowaga, New York.

For decades, a barrel like this was no surprise to American schoolchildren. A stockpile sat in the back of Bitterman’s school gym, and a yellow binder in the administration office held a set of hyper-local contingency plans for various disasters. So when COVID-19 reached the U.S., Bitterman, now an architecture professor at Alfred State College in upstate New York who studies how extreme events shape communities, remembered that barrel. Forty-one years later, he realized the country has lost its collective preparedness. “Why are we sitting in our houses waiting for someone to come save us?” he says. “No one’s coming.”

But there was a time when the nation felt that someone would come. The Great Depression birthed the New Deal, which gave Americans a safety net—Social Security, federal housing, and federal unemployment insurance—and instilled the belief that the government would step in when they needed a hand. Helping them prepare for a disaster or attack was part of the deal.

In 1941, after Americans watched British civilians take shelter in the London Tube during German bombardment in World War II, President Franklin Roosevelt formed the Office of Civilian Defense with the aim of helping Americans prepare for a military attack on a local level. A variety of government-mandated civil defense agencies operated from World War II through the Cold War and provided communities with guidelines and resources to keep emergency response local.

This effort manifested in the barrel and binder Bitterman remembers from childhood, as well as things like a national emergency alert system. Starting in the 1950s, designated civil defense radio channels would broadcast information in case of a Soviet attack. For decades, every radio and TV station was required to test the system weekly. The civil defense bible—the 162-page, government-issued “Blue Book”—laid out strategy and instructions for an emergency that often kept the responsibility hyperlocal. A family unit, the authors stressed, was the “basis for organized self-protection.” Soon, the need to be prepared seeped into all aspects of life, from architecture (basement bomb shelters) to education (the infamous classroom “duck and cover” drills).

Two decades later, the Cuban Missile Crisis delivered another wake-up call. A nuclear arsenal aimed at the U.S. from 90 miles off the coast, Bitterman says, eroded the idea that the country was safe from outside threat. The agency’s name would change over the years, but civil defense adapted to the evolving threats of the 20th century. It was, says Bitterman, “the one time in our shared American history when we had a unified, coordinated effort to prepare for disasters of all different kinds.”

As the Cold War thawed, the threat of natural disasters took its place: hurricanes on the east coast, tornados in the Midwest, earthquakes in California. Such problems were too large for local communities to manage on their own. Massive environmental contamination required federal clean-up, and disasters like the 1979 Three Mile Island reactor meltdown in Pennsylvania spooked the public.

The Office of Civil Defense no longer seemed relevant, partly because the methods they promoted had come to be seen as laughable. Duck and cover during a nuclear attack? People began to wonder if the drills were effective or just propaganda. In 1979, President Jimmy Carter disbanded the Office of Civil Defense in favor of a centralized disaster authority: the Federal Emergency Management Agency (FEMA).

But a series of mismanaged disaster responses, notably Hurricane Andrew in 1992 and Hurricane Katrina in 2005, caused some Americans to lose faith in FEMA. Enter modern-day preppers.

“You can trust Bob down the street or Police Sergeant Jane, but who knows who these people are coming in from Washington?” says Bitterman. “What has been a curious component of the evolution of FEMA is that the sheer size of it causes a distrust,” he adds. “That’s part of the catalyst that has given birth to the prepper movement.”

About two years ago, Anna Maria Bounds began attending monthly meetings of the New York City Preppers Network at a church in Harlem. At a typical meeting, participants discussed contingency plans for all types of natural and man-made disasters. On weekends they held excursions: Bounds learned to build a fire, filter water, provide basic first aid, and scope the best on-foot escape route from Manhattan.

Bounds, an assistant professor of sociology at Queens College, was researching a book on urban preppers. She noticed that the majority of members were people of color, and many were families. They had joined, she says, when disasters such as Hurricane Katrina made it clear that white and wealthier people would be better served in a crisis. The coronavirus pandemic has reinforced that view.

Money can buy safety in the form of private healthcare, remote work, and grocery deliveries, or—in the case of a multimillion-dollar survival community in rural Kansas—a condo in a decommissioned missile silo with former Navy SEAL security guards. Essential workers, largely from minority communities, don’t have that kind of protection. African Americans, Latinx, and other people of color in America have been disproportionately hit by the coronavirus.

“The pandemic has laid bare the inequality between classes,” says Bounds. “The thing about prepping is when we take a look at class division, it’s just a magnification of what already exists. The very wealthy are already opting out of many parts of the collective experience—this is just another case.”

The people Bounds met at the prepper meetups weren’t stockpiling bunkers with military-grade supplies—they shopped at REI and Costco, and learned the ropes with books found on Amazon. Even pre-pandemic, Pottery Barn and Nordstrom were selling survival bags from Los Angeles–based startup Preppi, recommended by Oprah and Gwyneth Paltrow. But if the mainstreaming of prepping can be measured by a single moment, it may be when, in February, Kim Kardashian posted a selfie in an N95 mask, rubber gloves, and a little orange bag pouch labeled “Judy” to her 179 million Instagram followers. “I travel prepared now thanks to @readysetjudy,” she wrote.

Judy is a disaster-preparedness company started by Simon Huck, known for almost two decades as an influencer guru to stars like the Kardashians. Two years after starting Judy, on January 27, 2020, he launched a line of curated survival supplies wrapped in bright orange packaging. His timing was fortuitous. “It’s hard,” he says now, “to find an adjective to describe [it].”

Within two months, the potent combination of a pandemic and a Kardashian Instagram shout-out tripled Huck’s sales. The vast majority of his customers were first-time preppers. In the kit, Huck included the number of a 24-hour expert hotline. Anyone could enter their zip code and receive a few texts a week with location-specific advice and data from the World Health Organization and the Centers for Disease Control. Over 40,000 people currently subscribe. “What is our responsibility as an emergency preparedness brand during a pandemic?” asks Huck. “We knew we needed to give information.”

There’s no shortage of services like Judy aiming to provide preparedness information and equipment. Survival schools in nearly every state teach off-grid living, homesteading, and wilderness skills. Prepper Camp USA offers three days of classes and camping in the Appalachian Mountains. And conventions like PrepperCon in Salt Lake City draw thousands of people with speakers, booths, and classroom trainings. But few of these have reached a mainstream audience.

Has the current health crisis permanently altered the way we buy groceries, go to school, and commute to work? Or will we fall back into our old habits as soon as a vaccine hits the market? Like Cold War-era basement bomb shelters and post-September 11 airport security screenings, the physical spaces around us will adapt. Before long they’ll blend seamlessly into the backdrop of our lives. Will prepping be among them?

“Do I think prepping is here to stay?” asks Bounds. “Absolutely. But I’d argue it was already mainstream but had a stigma. People weren’t talking about it. We’re all preppers now.”

How the U.S. stock market has treated new presidents