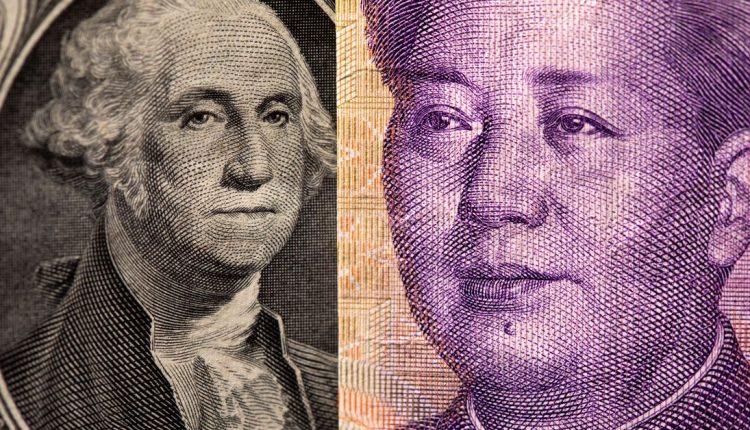 U.S. one dollar and Chinese Yuan are seen in this illustration taken May 7, 2021. REUTERS/Dado Ruvic/Illustration

The dollar gained ground on Wednesday, snapping a four-day losing streak and bouncing off a multi-month low following the release of the minutes from the Fed’s most recent monetary policy meeting.

In those minutes, a number of members of the U.S. Federal Reserve’s Federal Open Market Committee (FOMC) said that should the economic recovery continue to gain momentum, it would be appropriate “at some point” to discuss tightening its accommodative policy, giving the greenback a boost. read more

“The big thing from the Fed minutes is the mention of beginning of taper talks,” said Chris Gaffney, president of world markets at TIAA Bank in St. Louis. “Any mention of the Fed stepping in and raising rates will have a major impact on the dollar.”

Still, the minutes were from a meeting that occurred before the release of key economic data, which showed further weakness in the labor market and price spikes driven by a supply/demand imbalance.

Since then, the Fed has repeatedly offered assurances that surging prices in the near term will not translate to long-term inflation.

“The Fed is generally singing from the same song sheet, stating that inflation will be transitory,” Gaffney added. “In general, they’ve done a good job of keeping a pretty unified front.”

The dollar also benefited from a broad risk-off sentiment, which saw the major U.S stock indexes slide and cryptocurrencies plunge.

“When we saw the big move away from bitcoin, it was an indication that investors are moving away from risk assets, and that benefits the dollar,” Gaffney said. “It’s an indication of flight to safety.”

Bitcoin briefly plunged to its lowest level since January in the wake of China’s decision to ban financial and payment institutions from providing digital currency services, but pared its losses after some of its prominent backers reiterated their support. read more

Gaffney believes digital currency investors should gird their loins for more of the same.

“Crypto markets were ripe for a sell-off with the run-up we’ve seen,” he said. “I expect to see more of the wild roller-coaster ride that we’ve seen going forward.”

The dollar index , which measures the greenback against a basket of world currencies, was last up 0.52% at 90.254.

The greenback gained 0.64% against the Canadian dollar to $1.214, but was still hovering near its weakest level since May 2015.

The euro reversed course after touching its highest level against the dollar since the beginning of January, falling 0.5% to $1.2164.

Mario Andretti: America would “go crazy” over Herta in F1