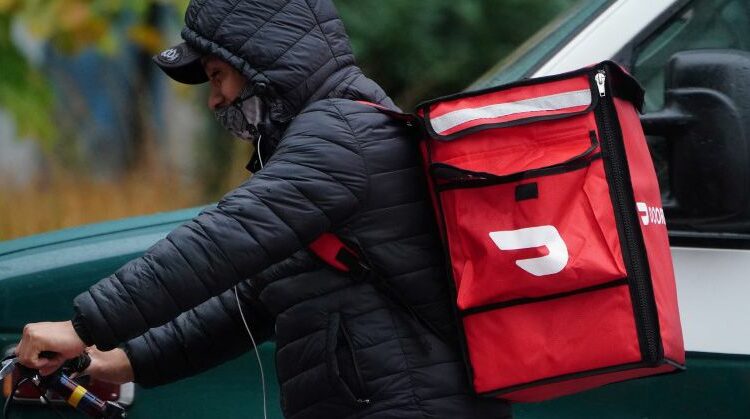 A delivery person for Doordash rides his bike in the rain during the coronavirus disease (COVID-19) pandemic in the Manhattan borough of New York City, New York, U.S., November 13, 2020. REUTERS/Carlo Allegri/File Photo

Aug 11 (Reuters) – U.S. food delivery firm DoorDash Inc (DASH.N) held talks over the past two months to buy grocery delivery company Instacart for a likely price of between $40 billion and $50 billion, The Information reported on Wednesday, citing people familiar with the situation.

The talks have fallen apart in recent weeks, the report added, partly over concerns whether the deal would get antitrust regulators’ approval. https://bit.ly/3CFoWUV

Instacart, which plans to list in the next few months, initiated the deal talks, according to the report.

Instacart had also separately initiated talks with Uber (UBER.N) about a sales partnership, like Uber’s partnership with GoPuff, under which customers of Uber’s food delivery service can buy items from GoPuff, the report said, citing a person familiar with the situation. These talks have also fallen apart.

An Instacart spokeswoman declined to comment when contacted by Reuters, while DoorDash said it does not comment on rumors and speculation.

Uber did not immediately respond to a request for comment.

Reporting by Juby Babu in Bengaluru; Editing by Shailesh Kuber

Mets rally to top Nationals in completion of suspended game