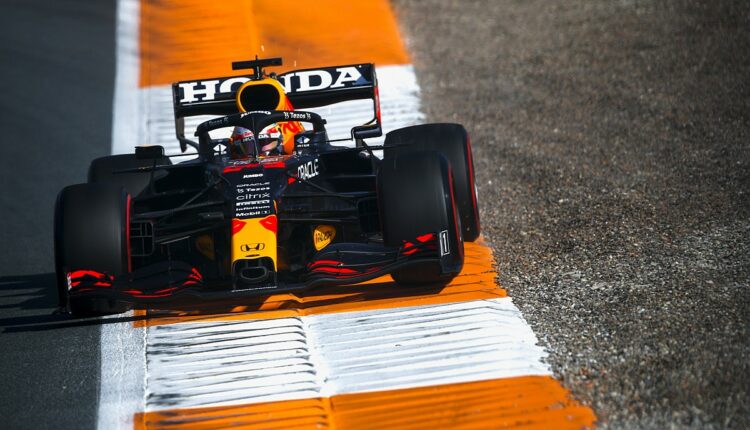 The Red Bull driver enjoyed a tow through the last sector to deliver a mighty 1m09.623s, which was the only lap to break the 1m10s barrier and he ran a full 0.0556s clear at the top.

Bottas was the closest challenger at Zandvoort courtesy of his 1m10.179s lap, although that was sufficient to beat the best effort managed by Hamilton by 0.24s.

Robert Kubica, who replaces Kimi Raikkonen at Alfa Romeo following a positive COVID test for the 2007 champion, was the first driver on track ahead of the Haas of Nikita Mazepin.

Kubica guided his car, shod in the fastest soft C3 Pirelli tyres, to a 1m15.854s to post the early benchmark as Mazepin ran 0.076s slower on the C2 yellow-walled medium compound.

Soft-tyred Schumacher then brought that down to a 1m14.099s after four minutes to run 1.755s clear at the top ahead of early runner Yuki Tsunoda for AlphaTauri.

Following his oil feed-induced stoppage early into FP2, Hamilton left the garage swiftly and moved to the head of the pack on soft tyres with his 1m12.010s.

He was deposed by Alonso after 14 minutes, with the Alpine racer taking the pace down to 1m11.996 on medium tyres before falling behind Hamilton, who was on a second run.

The Mercedes driver ran clear by a marginal 0.032s, but both of his runs were hindered by small mistakes.

Hamilton dropped his front-left wheel onto the gravel lining the inside of the Turn 12 sweeper before locking up and running over the grass during his second stint.

The brace of Ferraris headed out after 13 minutes, with Leclerc guiding his medium-tyred machine to the top on a 1m11.768s at his first attempt to find 0.196s over Hamilton.

FP2 pacesetter Leclerc was joined by Carlos Sainz, before the pair were split by McLaren’s Lando Norris and then Alonso again ran fastest on a 1m11.705s to find a 0.063s cushion.

Sainz soon ensured a clean sweep of red flags in the three practice sessions when he stopped proceedings after 20 minutes with sizeable damage to the front and left-rear of the car.

The Ferrari driver, who ran second fastest in FP2 behind Leclerc, lost the rear of through the Turn 2 kink and then span into the Tecro barrier lining the top of the banking of Turn 3.

Prior to the stoppage, Valtteri Bottas had just initiated his out-lap while Verstappen had yet to leave the garage, only joining the session after 33 minutes.

Verstappen finally commenced a medium-tyre run as he shared the track with a soft-shod Bottas, and it was the Red Bull driver who moved to the top with a 1m11.225s banker.

But Bottas responded straightaway on the quicker compound to run 0.008s clear and he headed straight for the pits as Verstappen remained on track to better his time.

That paid dividends when the Dutch racer clocked a 1m10.702s to dive under the 1m11s threshold for the first time, stretching out a sound half-second gap in his favour.

Norris moved to second, but was still 0.417s adrift, before Alonso again ran to the top of the leader board on the soft tyres thanks to his 1m10.670s flying lap.

The changes at the front were interrupted by a yellow flag at Turn 9, the scene of Norris suffering an episode of snap oversteer at the apex and running over the gravel.

Bottas then emerged on softs to run fastest with a 1m10.179s to find a chunky five-tenth swing over Alonso, as Hamilton provisionally clocked second when he lapped 0.238s slower.

As the session entered its final 10 minutes, Verstappen headed out for a penultimate run on the soft tyres and ran quickest in all three sectors, helped in part by a slipstream through the final part of the lap, to set the best time of the weekend.

Behind Bottas and Hamilton, who wound up 0.794s off the pace, Perez ran to fourth as Alonso was eventually shuffled down to fifth over Norris.

Lance Stroll headed the Aston Martin attack in seventh, eclipsing his teammate Sebastian Vettel, while Leclerc saw off Gasly in the battle on the fringes of the top 10.

Antonio Giovinazzi ran to 15th for Alfa Romeo, ahead of Sainz, and held a 0.9s advantage over the returning Kubica.