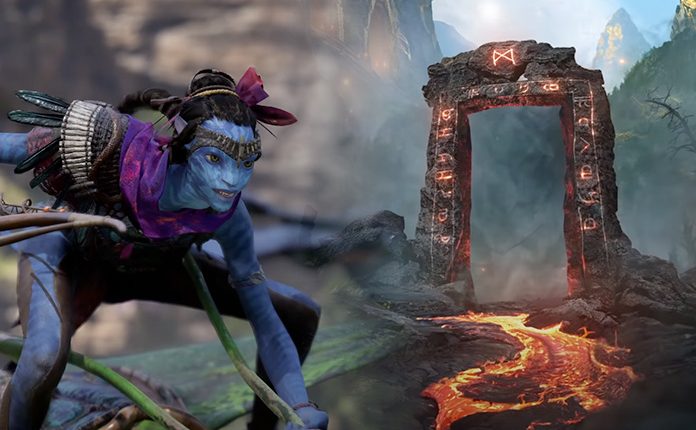 Avatar: Frontiers of Pandora
A first person, action-adventure game developed by Massive Entertainment on the Snowdrop engine and exclusive to next generation consoles and PC in 2022.

You play as a Na’vi and embark on a journey across the Western Frontier, a never-before-seen part of Pandora. Explore a living and reactive world inhabited by unique creatures and new characters, and push back the formidable RDA forces that threaten it.

With Hibana MIA, Ela, Lion, and Nomad mount a daring rescue mission as they use intel teamwork, and improvisation to save one of their own from a dangerous new enemy. The title will hit PS4, PS5, Xbox One, Xbox Series X/S, and PC with crossplay promised.

There’s also a promise that for the first time on an AC title, they plan to work on more expansions that will go well into the game’s second year including a tease that ‘Eivor is not done with Odin yet’.

Mario + Rabbids: Spark of Hope
Mario, Rabbid Peach, and their friends go on a mission to save the galaxy in this Nintendo Switch exclusive coming in 2022. Cursa, a mysterious and malevolent entity seeks out energy to further its nefarious plans. To bring order back to the galaxy and save the Sparks, Mario and friends team up with Rabbids heroes in a journey through mysterious and ever-surprising planets.

Far Cry 6
The presentation for the forthcoming “Far Cry 6” was all about the villains as the title’s season pass content was revealed and shows you playing as the villains of the three previous main titles – Vaas Montenegro, Pagam Min, and Joseph Seed – as you go into their back stories.

All the original voice actors are back for the title which sees players having to battle the inner demons of these bad guys. In addition, “Far Cry 3: Blood Dragon” will be returning for season pass owners. A new cinematic trailer was also released focusing on the sixth game’s main villain.

Just Dance 2022
Ubisoft announced that the next installment in their long-running game series will launch on November 4th and will feature 40 new songs including Imagine Dragons’ “Believer” and Ciara’s “Level Up”. There will also be an exclusive version of Todrick Hall’s “Nails, Hair, Hips, Heels” with new lyrics handcrafted specifically for Just Dance.

Pearce takes over a contract in London and reunites with Wrench and his nephew Jackson. Caught between a powerful military robotics corporation and a returning DedSec member with an opposing agenda, Aiden must rely on his grit and experience to navigate a hostile city.

Brawlhalla
The Teenage Mutant Ninja Turtles are coming to the free-to-play platform fighter “Brawlhalla” next week, specifically from June 16th. Michaelangelo, Donatello, Leonardo, and Raphael join the 50+ characters that currently fill out the roster. In addition, a new game mode called Crew Battles will soon be added to the game.

5 Moves for a Quick and Complete Upper-Body Workout