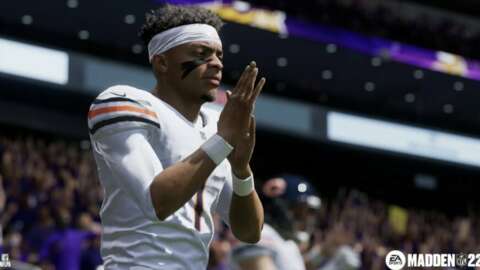 Electronic Arts has already announced that EA Play members will be able to play the Madden NFL 22 Early Access trial starting on August 12. Those members will also receive 10% off of their preorder, as well as other perks including a Launch Welcome Pack in Madden Ultimate Team, monthly Ultimate Team Pack rewards, and eligibility for a Madden Veteran Bonus based on the number of previous years played.

From August 12 to 20, EA Play members can play a Madden Ultimate Team event in order to complete a set of challenges to win an elite wide receiver. Players can also win exclusive Tom Brady and Patrick Mahomes Power Up item art.

#GetMoreGame means getting more exclusive benefits to stand out from the crowd.
Be sure to log in and claim your EA Play August member benefits from Apex Legends🤖, Knockout City☄️, Madden NFL🏈, and FIFA⚽️! Also, here’s a glimpse of what’s coming next to the Play List 👀🏎💨. pic.twitter.com/h8Kf8T0E6n

From now until September 1, FIFA 21 members can claim the EA Play Volta Squad Boost, which sees Groundbreaker Thierry Henry and the Nowhere FC Apparel Set return, along with 3,500 Volta coins. In Knockout City, for each Orange Overcharge brawlers drink, players will be rewarded with an extra 500% bonus experience boost for every KO finish from Overcharged Shots. This starts now and lasts until September 27.

Lastly, Apex Legends will give EA Play members a Dicey Weapon Charm as a collaboration with the upcoming Lost in Random game.

Madden NFL 22 launches on August 20 for Google Stadia, PC, PlayStation 4, PlayStation 5, Xbox One, and Xbox Series. Those who preorder the Dynasty Edition gain early access to the full game on August 17.