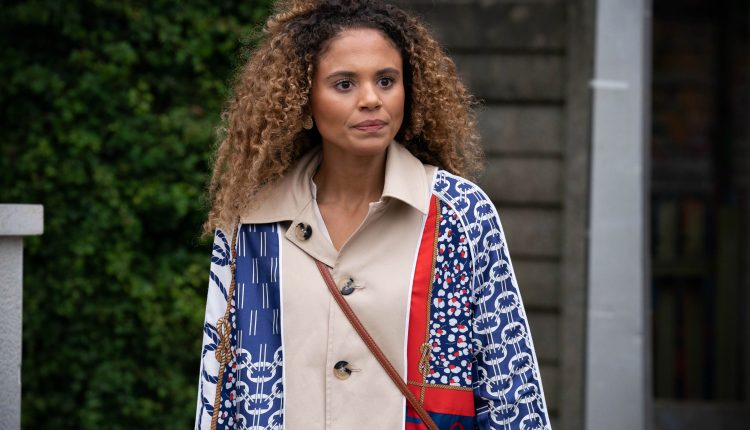 Chantelle Atkins (Jessica Plummer) has set in motion her plan to leave husband Gray (Toby-Alexander Smith) in EastEnders, and while she does manage to escape at first, tragedy later ensues.

Upon the soap’s return, Chantelle decided that enough was enough and therefore set in motion a plan to escape Gray once and for all.

However, she soon realised that doing so would be a lot more expensive than she’d bargained for, and therefore sought out boss Kheerat Panesar (Jaz Deol) — hoping he could help.

He ultimately agrees to do so, and next week, Chantelle puts plans in place to make an exit, as she packs as much as she can for her ‘family holiday’.

The Taylors arrive on her doorstep — all dressed in holiday attire — and she’s terrified that such a thing will blow her cover, but she ultimately talks Gray round, and he agrees that she can go on the little trip. .

Afterwards, she visits Kheerat, and drops quite the bombshell — revealing that she never plans on returning.

The abuser throws something of a spanner in the works when he reveals that he’s sweet-talked her parents into allowing Mia and Mackenzie to stay at home with him.

Chantelle’s world crumbles — knowing that she can no longer make her getaway — but as she takes a moment to herself in a seaside cafe, Mitch decides to cheer her up, and therefore heads to Walford to pick up her children.

The young woman is overjoyed — that is, until she discovers that Gray has come along too.

Two thirds of women who were experiencing abuse from their partner/ex-partner in June told a Women’s Aid study that their abuser had started using lockdown restrictions or the Covid-19 virus and its consequences as part of the abuse.  (66.7% of those answering question – Women’s Aid Survivor Survey, June 2020).

At the height of lockdown over three quarters of women living with an abuser said they felt they could not leave or get away because of the pandemic. (78.6% of those answering question – Women’s Aid Survivor Survey, April 2020).

At the cafe, she takes a call from Kheerat, and — later — when she returns to the B&B, she’s uneasy to find Gray waiting there.

The Taylors relax with a movie to end the evening on Thursday (September 17), but Gray insists that he, Chantelle and the children return to Walford.

Chantelle is unable to argue, and therefore they set off — but Mitch detects a flicker of fear in Chantelle’s face.

Back in Walford, Chantelle bravely musters up the courage to tell Gray that she is leaving him once and for all, but she’s unaware that things are about to get a whole lot worse — and ultimately have tragic consequences for her.

It has been confirmed that Chantelle will die at the hands of abuser Gray.

One to watch: Friday September 18 at 8pm on BBC One.