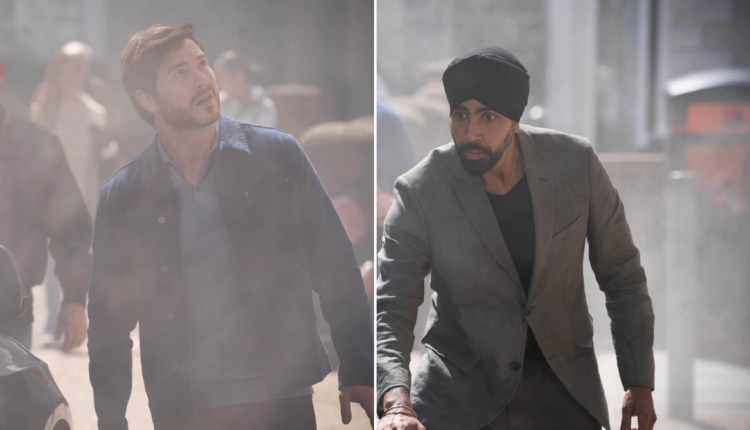 This is the terrifying moment in EastEnders which sees a fire take hold in the Mitchell household as residents race to the rescue; but who will become trapped in the flames and is someone set to die?

With Phil Mitchell (Steve McFadden) left smacked to the ground by a vengeful Shirley Carter (Linda Henry), flames surround him and he isn’t the only person trapped inside.

Smoke billows out as the inferno spreads and neighbours spot the commotion and rush forward.

As the new images show, Kheerat Panesar (Jaz Deol) leads the way in the crowd, calling out for anyone to respond.

It seems like he is set to enter the flames himself as a hero but with Gray Atkins (Toby Alexander-Smith) looming behind him, will he follow and take advantage of the situation against his enemy Kheerat?

Meanwhile Billy (Perry Fenwick) can be seen in the pictures too, as he looks on in shock. Will he risk his life to save Phil?

He isn’t the only member of the clan contemplating this as Ben (Max Bowden) and his husband Callum (Tony Clay) rush to the catastrophe.

Approaching the back gate, they steel themselves to enter the deadly situation but will everyone make it out alive?

The dramatic fire is just one huge moment of a massive fortnight which kicks off with the return of Janine Butcher (Charlie Brooks), who is also set to be central to the fire scenes.

But that’s not all! We will also see the return of Stacey Slater (Lacey Turner), who will be visited by ex husband Martin Fowler (James Bye), who tells her that he now believes he r about Ruby Allen (Louisa Lytton).

That’s big of him!

We are also anticipating the departures of Ruby and Linda, with Louisa Lytton and Kellie Bright set to depart on maternity leave.

With the fire at the heart of everything and cast changes left, right and centre, it’s a rollercoaster chain of events.

Will everyone be alive to reflect on them afterwards?

EastEnders airs these scenes on Monday September 13 at 8:05pm on BBC One.

How to Style This Flowy Maxi Dress From Summer to Fall