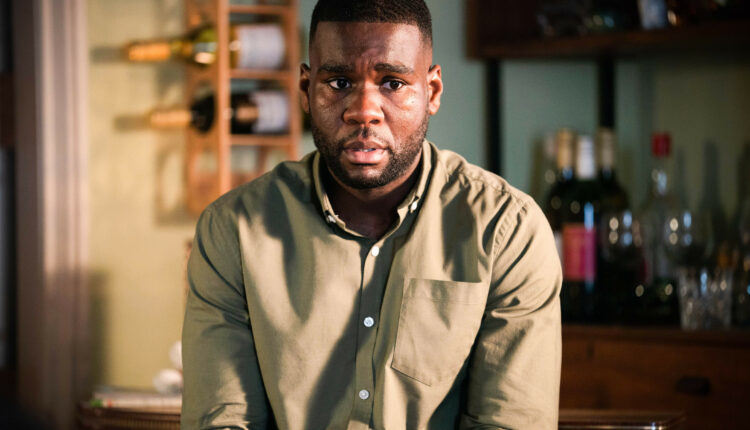 EastEnders has confirmed a long running storyline for Isaac Baptiste (Stevie Basaula), who experiences symptoms of his schizophrenia after he stops taking his medication in coming weeks.

And as his illness becomes common knowledge in the Square, EastEnders will explore polarising opinions and attitudes towards the often misunderstood illness.

EastEnders have been working closely with leading mental health charity Mind to accurately and sensitively depict Isaac’s diagnosis of schizophrenia on screen.

Mind have provided research, guidance and workshops to the writers, producers and actors to help give an insight into the emotional and social experience of living with schizophrenia, particularly looking at attitudes towards mental health in African Caribbean communities.

With the start of mental health awareness week, the storyline aims to encourage vital conversations about the realities of living with a mental health problem.

Isaac has shared his diagnosis with his dad Patrick (Rudolph Walker), and is dealing with his mum Sheree’s (Suzette Lewellyn) resistance as she was desperate to keep his schizophrenia secret from friends and family.

Isaac’s mental health begins to decline after learning of his brother’s death and fears over Patrick taking part in a medical trial. He begins to question his own diagnosis and abruptly stops taking his medication.

In the coming weeks the audience will see Isaac dealing with stigmatising views from friends and family and how he manages his mental health on a daily basis as he begins to experience symptoms.

Mind’s work advising on the show drew both on the lived experience of Mind Media Volunteer, Antonio, who gave one-to-one feedback about his experiences of schizophrenia to Stevie Basaula (Isaac), as well as learnings from its Young Black Men programme.

The programme aims to increase understanding of mental health problems and how they intersect with race by offering tailored services created specifically with young Black men. Research has shown that black men are far more likely than others to be diagnosed with severe mental health problems.

Of his storyline, Stevie Basaula says: ‘This is close to my heart, to be telling Isaac’s story is a privilege. I hope it will start a dialogue for people to have conversations about mental health and that anyone living with the condition will feel seen.

‘Working with Mind has been so useful, I spoke to a young man who bravely shared his story and it was inspiring to learn how he’s managing his condition. There’s so much we think we know about schizophrenia, but it’s often not the reality for people living with the condition.

‘I hope that anyone engaging with Isaac’s story will gain a better understanding and can approach someone they know that may be struggling from a more positive place.’

Jon Sen, Executive Producer, EastEnders says: ‘Working with Mind has been imperative in ensuring we tell Isaac’s story truthfully. There’s a multitude of layers to this storyline and  Mind’s expertise has been crucial as we explore Isaac’s experience.

‘As his condition escalates, we’ll see how this affects him and his loved ones in the coming months and I’m looking forward to audiences following Isaac’s undoubtedly difficult yet eye-opening journey ahead with fantastic actors in Stevie, Suzette, Rudolph and Danielle at the helm.’

Alex Bushill, Head of Media and PR at Mind added: ‘On screen fictional portrayals can drastically shift how we think, feel and behave in relation to our mental health.

‘We know that mental health storylines in dramas, when they’re done well, help people to speak out, seek help and support each other. We know that schizophrenia is one of the most stigmatised and least understood mental health diagnosis and we applaud EastEnders’ efforts to accurately and sensitively portray it on the show.

‘Through our Media Advisory Service, we have worked closely with the EastEnders team to ensure the depiction of a young Black man facing a mental health crisis was handled sensitively and portrayed accurately.

‘Over this period our team delivered workshops, to the leading actors, provided feedback on scripts and met with producers to help build a greater understanding of what it’s actually like for Black men experiencing schizophrenia.

‘We hope that this storyline will help raise awareness of schizophrenia, debunk some myths and challenge stereotypes. We hope that anyone watching the storyline who is experiencing a mental health problem feels encouraged to seek support.’

Metro.co.uk is this week running a special Mental Health Takeover week with soaps section coming into focus on Friday Ma 14, where we will get deeper insight from Stevie and Suzette.