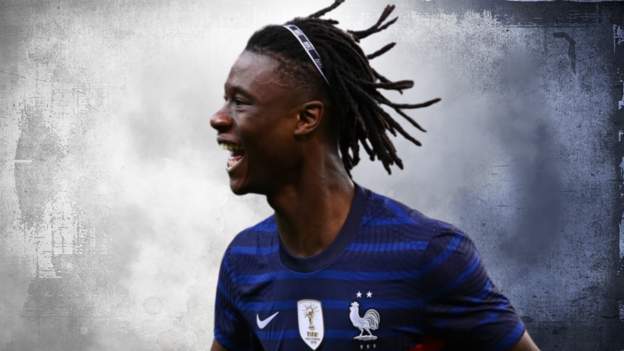 In April 2019 Camavinga became Rennes’ youngest debutant aged 16 years and four monthsIt takes a special talent to stand out as a young player in France given this is the country’s most fruitful era for producing stars in a generation – but Eduardo Camavinga has done it.

And for this gifted teenager, it is simplicity rather than the spectacular that has been the key to his rise.

The Angolan-born former refugee, who arrived in France as a two-year-old, settled into the Rennes first team at the age of 16 as if he had been there for years.

Now, at just 18, he is at Real Madrid – one of the biggest clubs in the world – and scored on his debut at the Bernabeu against Celta Vigo on Sunday, making an instant impact after a £27m summer move.

At 18 years and 306 days, Eduardo Camavinga is the second-youngest player to score on his debut for Real Madrid in the 21st Century’When he plays, he smiles'”He is a team player, and an elegant player,” France Under-19 coach Landry Chauvin, who worked with Camavinga in the youth set up at Rennes, tells BBC Sport. “He is not an individual or a soloist; he respects the collective.

“He plays with his head up. He is always focussed on the position of his team-mates. When he plays, he smiles.

“When they make their professional debut, a lot of young players think they’ve arrived, so they complicate things. Eduardo is one of those who knew to stay simple, because he is so intelligent.”

After exploding onto the scene in Ligue 1, the midfielder became the youngest senior France international since 1914 when he made his Les Bleus debut against Croatia in the Nations League in September 2020 – and scored his first goal a month later in the 7-1 friendly win over Ukraine.

As interest in him and speculation around him grew – with Europe’s top clubs watching as his contract ran down – those distractions had an impact and his performances began to wane.

“He was starting to fall out of the Rennes starting XI last season,” says French football expert Robin Bairner.

“Even at the start of this year, he hasn’t played to his best level. He started the first game of the season but was substituted and roundly criticised for his performance. He’s been a substitute ever since.

“While I do think he has the ability to play for Real Madrid, it is a very difficult time to be going there. With his form and confidence, it is going to be difficult for him to slot into the team. The fans there can turn on you if they expect you to be world class and you are struggling.”

“We must give him time,” Chauvin says. “He has had a lot of critics in France, but we must let him work, step by step. It is normal that his second season is more difficult.”

‘Real Madrid is a club where there isn’t time’Given Real Madrid’s reputation for demanding instant success and buying ready-made, hyper-marketable superstars – they tried and failed to sign Paris St-Germain forward Kylian Mbappe this summer – there are concerns that Camavinga could get swallowed up by the pressure.

“If you look at Madrid’s recent signings – with the exception of attempts to sign Mbappe – like Vinicius Jr and Rodrygo, there has been a policy shift to players like Camavinga,” says Sid Lowe, Spain-based football journalist for The Guardian.

“They are aware of a shift in the market and this is a response to the new economic reality: looking for the players who potentially will be the best players in the world, rather than already are. In that sense Camavinga does fit.

“The new policy goes hand-in-hand with greater patience and an awareness that you don’t need to bring players through immediately. That said, Real Madrid is a club where, by definition, there isn’t time.

“I don’t think anybody truly anticipates Camavinga becoming a starter this year, next year or possibly the year after that.”

Madrid’s track record with youth does not appear conducive to helping a player such as Camavinga shine. Academy graduates rarely become first-team regulars, and previous signings of his ilk – such as Martin Odegaard and Dani Ceballos – have been sent out on loan, forgotten about and returned too far down the pecking order to succeed.

“It all depends how much of hurry Camavinga is in,” Lowe adds. “I think it is very easy to say ‘Florentino Perez wants the stars’, but part of the conversation when Carlo Ancelotti returned was, ‘it is your job to make Vinicius and Rodrygo that next generation of great player’.

“I think Florentino would much prefer the star of the team to be Vinicius than (Gareth) Bale. Although everyone wants results, that isn’t incompatible with giving Camavinga minutes.”

‘He is a complete midfielder’With decorated central midfielders Luka Modric and Toni Kroos coming towards the end of their careers, Camavinga does have an obvious route into the team in the near future and Bairner believes he has the attributes to succeed in any role.

“There has been a lot of talk about a change in position, from a six to an eight. His game cannot be pigeonholed,” he says. “He can do a bit of everything and is a complete midfielder. He’s played almost 40 first-team games and has only scored one goal; he operates in a deep area of the pitch and does plenty of defensive work.”

“Eduardo is unique,” Chauvin adds. “It is impossible to compare him to anyone; left foot, box-to-box, and a modern midfielder. We can’t have a defensive midfielder, an attacking midfielder and a box-to-box anymore; we must have three players who can do all roles in a 4-3-3. This is what Eduardo can do.

“In the beginning, he will observe how Modric and Kroos play, and then he’ll begin to play himself. By the end of the season, he’ll be indispensable. In the next three years, he’ll be one of the best players in the world.”

There is naturally pressure on Camavinga to prove he is worth his hefty transfer fee, but there is arguably just as much pressure on Real Madrid to make this move work.

With no big-money signings, a manager noted as a fine and understanding coach and his impressive first outing for the club, the conditions might just be right for this precocious teenager to flourish.