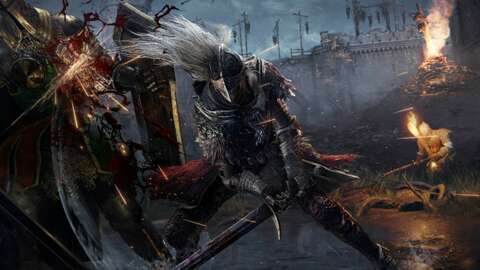 From Software is bringing the best of Dark Souls, Bloodborne, and Sekiro to its new game.

Despite how little we’ve seen of Elden Ring, those familiar with From Software’s catalogue will have a good idea of what to expect. Surprising absolutely no one, Elden Ring is a dark fantasy action RPG set in an intricately constructed world. It delivers its narrative in fragmented pieces, leaving the player to make connections, fill in the gaps, and draw conclusions. Its gameplay marries the tension of venturing into the unknown with the joy of discovery and, most importantly, it emphasizes a sense of accomplishment that comes from conquering seemingly insurmountable challenges.

Elden Ring is the exact kind of game that From Software is known for creating, but it’s also an exciting evolution that takes the best of what came before and extrapolates it out onto a much grander scale, potentially realizing that open-world Soulsborne fantasy that many fans have been eager for.

According to From Software’s Yasuhiro Kitao, however, the team didn’t set out to make an open-world title. In fact, From Software isn’t even sure if it has the correct definition of what encompasses an open-world experience, and so isn’t quick to call Elden Ring one. When watching the gameplay, the reticence to categorize Elden Ring as what it seems to be begins to make sense. To be clear, it is unmistakably an open-world game, but one that is cut from the same cloth as The Legend of Zelda: Breath of the Wild, rather than any of the recent Assassin’s Creed titles. The distinguishing factor between them, for me, is how deliberate the construction of the world feels and what the moment-to-moment experience of adventuring is like.

The Lands Between, where Elden Ring is set, is an interconnected world that, while vast, didn’t look like it was big just for the sake of being big. That much comes through when looking at how dense the world is visually. Whether standing atop craggy cliffs, peering out over a land blanketed in an ominous fog, venturing into snow-capped mountains, or trudging through flooded cities, From Software wants you to always be drawn towards something of interest on the horizon and hopes that, along the way, you may accidentally stumble upon the unexpected. A lot like Breath of the Wild, the developer is counting on curiosity to be your guide instead of dozens of icons on a map.

Similarly, the things that you stumble upon–or have thrust in front of you–feel more emergent than in most open-world games. In a hands-off gameplay demo I saw, one such moment was a dragon suddenly swooping down and engaging the player. In any other Soulsborne game, the telltale signs of a scripted boss fight would appear–a terrifying but epic orchestral score accompanied by a health bar, and a fog gate that signifies that you are definitely trapped–but these elements didn’t appear. It was just an incredibly pissed-off dragon looking to pick off a wandering warrior.

Scattered throughout the overworld are dungeons that can be stumbled upon while exploring. These, in classic From Software fashion, are sometimes deadly detours that invite players to overcome traps, enemies hiding in dark corners, and the occasional boss in order to find treasures. Interestingly, the one I saw felt reminiscent of a Bloodborne Chalice Dungeon. Depending on your opinion of the divisive Chalice Dungeons, that may not sound particularly enticing, but I didn’t see enough of these dungeons to say whether each of them is bespoke in design or procedurally generated like many of Bloodborne’s. Everything you know and love from a Soulsborne dungeon is otherwise present: intimidatingly large blades swinging around environments, ready to cleave you in two at the slightest misstep; monsters that pounce on you as you emerge from a doorway; and a wooden chest with a chain curved upwards. Hmmm.

Also scattered around the world are what From Software calls “Legacy Dungeons.” The name is intended to signify that these areas present something akin to the traditional Soulsborne gameplay in a contained environment. The Legacy Dungeon we ventured into was Stormvale Castle which, in classic Soulsborne fashion, is an expansive medieval structure that dares players to breach its gates. However, a weathered, beastly-looking figure wearing an ornate book as a necklace, who can be found skulking in a dark corner nearby, advises you to do otherwise. Stormvale’s gates are closed, but he can request they be opened for you, a foul Tarnished in search of the Elden Ring.

Here’s where things change in a more obvious fashion: the player is presented with a choice. They can either request that the strange figure give the signal to open the gate or heed the warning and take a back route that is much safer. Bold adventurers will want to go through the front gate, but given the immediate barrage of arrows that followed the moment the Tarnished crossed the threshold, I suspect they’ll realize the back route is the smarter option. Picking one doesn’t lock you out of the other path, however. Instead, this choice is presented as a kind of on-the-fly difficulty decision. Does the idea of overcoming a Sisyphean task sound like a good time to you? Or do you want to take an easier, but still challenging, approach?

Difficult challenges are the cornerstone of From Software’s games, but in Elden Ring the developer seems to acknowledge that there’s more room to explore the idea of overcoming hardship in ways that preserve the sense of satisfaction. According to Kitao, From Software’s intention is never to create a difficult game just for the sake of it. Instead, the team wants players to enjoy the experience, clear hurdles, and see the game through. It creates games with a sense of value derived from overcoming hardships, and Elden Ring implements new ways to do this. One of these is by taking mechanics from its last game, Sekiro: Shadows Die Twice.

Like Sekiro’s protagonist, Wolf, the Tarnished is agile, capable of leaping into the air at a moment’s notice. In terms of gameplay, this means that platforming is now more integral to the gameplay experience and, as such, Stormvale Castle is designed with verticality in mind. The Tarnished is shown jumping from rooftop to rooftop, slinking through an open window, and down into the castle. Out in the fields of the Lands Between, the Tarnished can engage in stealth, opting to circumvent combat entirely, or adopt an assassination-oriented playstyle. In outright battle, meanwhile, a leaping heavy attack will break through an enemy’s stance, leaving them vulnerable.

In addition to creating exciting new gameplay prospects within the Soulsborne framework, this new injection of agility means people who may not be as confident in standing their ground and fighting towering beasts, imposing knights, or deadly magicians have a way to take some semblance of control in battle by dictating the pace a bit more. Another way they can turn the tides in their favor is by summoning what are essentially minions that will fight for you. These function similarly to a co-op partner, but with decidedly less staying power. The summons I saw didn’t seem like they could stand-up to a boss, but against a mob of enemies they were effective at taking the pressure off and even thinning out the crowd.

Venturing into Stormvale Castle, in many ways, felt like a slice of stepping into the world of Dark Souls and having that kind of gameplay experience, so to that end the Legacy Dungeons seem like they’ll live up to the name. However, what’s most exciting is that From Software has said the world is made up of a variety of distinct areas, each with their own aesthetic, vibe, and feel. While we’re yet to see what that means, the prospect of venturing into a part of the world that feels like something out of Bloodborne, or Demon’s Souls, or something entirely new is incredibly exciting.

Again, Kitao said that Elden Ring aims to make the most of its sprawling world, so there will be plenty of interesting places to discover. Perhaps more importantly, there will be plenty of interesting people to discover too. From Software describes the story of Elden Ring as a “multi-protagonist drama.” While facing old heroes and demigods in search of the Elden Ring, the Tarnished will encounter a variety of characters, and the game is more focused on them than any of From Software’s previous titles.

Characters have always been crucial to the narrative of the Soulsborne titles–you only have to look at the fandom around Solaire, Siegmeyer, Micolash, or Genichiro, among many others, to know how important they are to From Software’s games and the people that play them. Elden Ring aims to double down on characters to address the fact that, for many, From Software’s games have stories that are difficult to parse. By focusing on characters and the drama surrounding them, the narrative is painted in a much clearer way, establishing a strong baseline that anyone can enjoy.

That’s not to say it’ll be as straightforward a tale as Sekiro. George R.R. Martin’s involvement all but guarantees that. The Song of Ice and Fire author laid the foundation for Elden Ring’s mythos, creating characters, rivalries, political intrigue, corrupted lineages, and more. And From Software has built upon this foundation with its own brand of storytelling. According to Kitao, not all of Martin’s work is represented in the final game, in some cases, characters he created aren’t in the game, but their place within the history of the world is represented. This is the kind of thing that will no doubt serve as fodder for the obsessive Soulsborne community to dig into.

My biggest takeaway from the short gameplay demo I saw is that, yes, Elden Ring is an open-world game, but not the kind that I’ve become thoroughly exhausted by in recent years. It doesn’t seem like we’ll be going through the motions of repeating three kinds of side-mission in between moving from one designated main story point to the other, and occasionally being distracted by some sort of meaningless trinket to collect. Based on the little I saw, there’s a deliberate nature to its design; a focus on a rewarding sense of exploration and discovery, and content that’s curated to ensure that the experience as a whole is faithful to the design philosophy and general vibe of From Software games.

I guess… Elden Ring could be the Dark Souls of The Legend of Zelda: Breath of the Wild. Sorry.