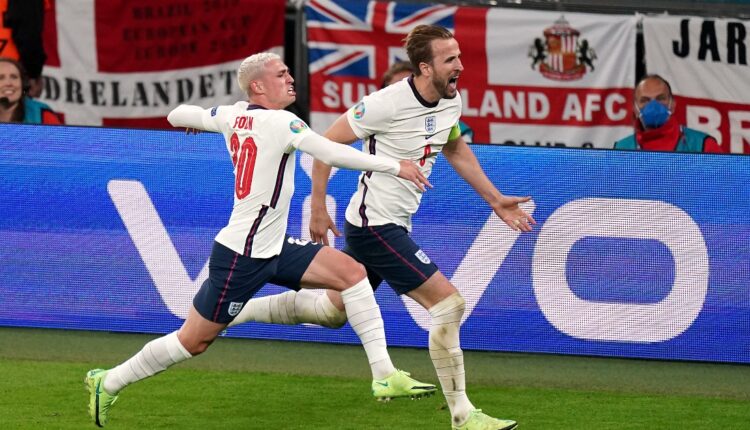 After topping their group, beating Germany and swatting aside Ukraine, this semi-final victory gives the Three Lions a chance to follow in the footsteps of the triumphant 1966 World Cup side by lifting silverware at Wembley.

Italy lie in wait after a tense, pulsating semi-final under the arch on Wednesday night, when Simon Kjaer’s own goal cancelled out a superb Mikkel Damsgaard free-kick before Kane sealed a 2-1 extra-time win after his penalty was saved.

The five toughest routes to a Euros final by FIFA ranking

The final whistle sparked pandemonium in the ground and across the nation as dreams of football coming home edged closer to reality, 25 years on from Southgate’s penalty miss at this stage of the competition against Germany.

England made a start as electric as the atmosphere at Wembley, but Damsgaard’s stunning 25-yard free-kick silenced the home support as the 21-year-old continued to shine in place of the sadly absent Christian Eriksen.

It was the first goal England had conceded during an unusually straightforward summer, but they responded well to the setback and Kjaer turned teenager Bukayo Saka’s cross into his own goal under pressure from Raheem Sterling.

Kasper Schmeichel had superbly denied the latter moments earlier and the goalkeeper shone throughout a second half in which the video assistant referee cleared a Christian Norgaard challenge on Kane in the box.

The Denmark goalkeeper continued to impress in extra-time but could not stop England progressing to the final, with Kane slotting home after the Leicester man saved his initial spot-kick after Sterling was fouled.

Nobody watching at Wembley or from afar will forget this comeback victory, three years on from the extra-time loss to Croatia in the World Cup semi-finals.

England are a better, more rounded side than they were in Russia and started on the front foot on Wednesday.

But they were unable to turn that bright start into an early goal and Denmark grew into proceedings, with Pierre-Emile Hojbjerg seeing a shot saved and Jordan Pickford surviving a lackadaisical moment.

Unfortunately, he only managed to extend it to 726 minutes.

Luke Shaw was adjudged to have fouled Andreas Christensen when a free-kick came over, giving Denmark another chance from a better position.

Damsgaard stood over it and unleashed a thumping 25-yard strike that beat Pickford, sending Denmark’s red wall into raptures in the 30th minute.

Southgate urged his side to relax and refocus – easier said than done after that gut punch.

But England did eventually settle back into a rhythm and Schmeichel spread himself well to stop Sterling turning home a Kane cross from close range.

It was a huge missed opportunity that the forward helped atone for in the 39th minute.

Saka kept his cool and drove over a cross from the right that Kjaer turned into his own goal under pressure from Sterling.

Harry Maguire saw a goalbound header superbly denied one-handed by Schmeichel in a second half that England were controlling as Denmark began to retreat deeper.

Southgate turned to fan favourite Jack Grealish to change the dynamics and the VAR decided against awarding a penalty after reviewing a clumsy Norgaard challenge on Kane.

England continued to push right into stoppage-time, when Maguire saw another header saved by Schmeichel and Kane’s point-blank effort was blocked by Kjaer.

Referee Danny Makkelie ran over to report something to the UEFA delegate early in extra-time, which was only four minutes old when Schmeichel down to his right to push away a low Kane effort.

Grealish stung the palms as the onslaught continued, with fleet-footed Sterling creating havoc for the tiring Danish defenders.

Joakim Maehle was adjudged to have ended Sterling’s mazy run and Makkelie pointed to the spot. There was another ball on the pitch during a phase of play that the VAR reviewed, but the decision stood.

Kane stepped up and Schmeichel saved, only for the ball to land kindly for him six yards out to turn home and spark bedlam in the stands.

Denmark tried desperately to level in the second period but a Martin Braithwaite shot was the biggest threat they managed, with Sterling denied by Schmeichel before the final whistle sent the 60,000-plus crowd wild.