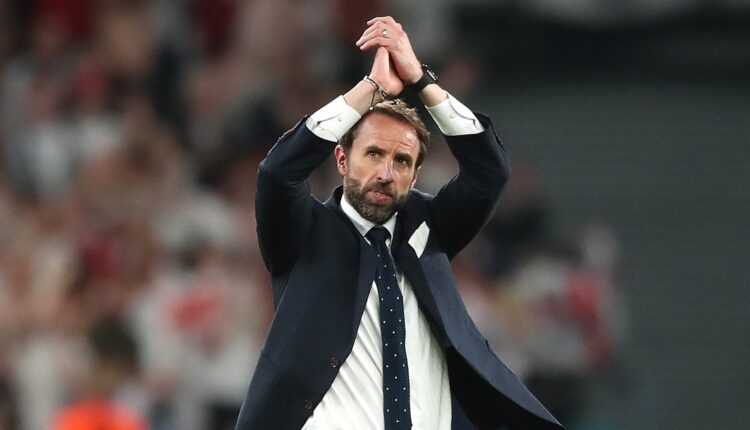 England boss Gareth Southgate believes his team ‘put things right’ with their 2-1 semi-final victory over Denmark at the Euros.

The Three Lions were knocked out of the 2018 World Cup in the last four but managed to go one better this time around.

The five toughest routes to a Euros final by FIFA ranking

However, it didn’t all go to plan for the Three Lions. Damsgaard silenced the home crowd by firing a stunning free-kick past Jordan Pickford in the 30th minute.

A fine through ball from Kane found Bukayo Saka on the right wing. He put in a dangerous ball which was turned over the line by the Danish skipper, under pressure from Sterling.

Centre-back Harry Maguire had the best chance of the second half. He rose tall to head a Mason Mount set-piece towards goal, only to see Kasper Schmeichel pull off a great diving stop.

It then went to extra-time at Wembley. Sterling continued to cause problems late on, even after more than 100 minutes on the pitch.

He drove at Joakim Maehle and Mathias Jensen in the box and was brought down due to a combination of their challenges.

The penalty seemed soft although England didn’t care. Kane saw his penalty saved but ran up to smash home the follow-up.

Speaking after the win, Southgate told reporters: “I’m so proud of the players. It’s an incredible occasion to be a part of – we knew it wouldn’t be straight-forward, we said to the players we’ll have to show our resilience and come back from some setbacks, and we’ve done that tonight.”

When asked about Kane’s cool finish, he continued: “There’s nobody you’ve rather have on it, but you’re up against a great goalkeeper who he’s obviously faced a lot of times – but thankfully that’s now immaterial.

“I felt we would get there – I knew we would have different sorts of battles because Denmark are so under-rated as a team,” Southgate added.

“They did cause us a lot of problems, when you’ve waited as long as we have to get through a semi-final, the players, considering the limited international experience some of them have had, they’ve done an incredible job.

“The most pleasing thing is that we’ve given our fans and our nation a fantastic night, and the journey continues on for another four days. To come through that sort of a night – we suffered in Moscow (in the World Cup semi-final) and on a night like this we’ve managed to put things right.”