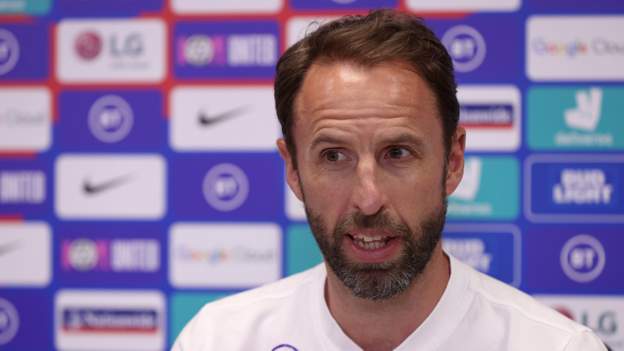 Manager Gareth Southgate once again selected an experimental starting line-up which included three players – Ben Godfrey, Ben White and James Ward-Prowse – who were not named in his 26-man squad for Euro 2020.

There was a mixed reaction to England’s players continuing to take the knee before kick-off, loud jeering being matched by applause as Southgate insisted they will continue to take this public stand against racial injustice.

England posed the greater attacking threat, with both Dominic Calvert-Lewin and Jadon Sancho hitting the woodwork in the first half, before Marcus Rashford put them ahead from the penalty spot in the 68th minute after Jack Grealish, inevitably, was fouled by Tiberiu Capusa.

It was the perfect way to mark Rashford being given the captain’s armband, making him youngest black player to lead England at 23 years and 218 days.

West Bromwich Albion keeper Sam Johnstone won his first England cap and gave a very sound performance, the highlight of which was a magnificent reaction save from Andre Ivan.

Liverpool captain Jordan Henderson gave Southgate a lift when he appeared at half-time for his first action since 20 February – although he did not cover himself in glory when he saw his late penalty saved by keeper Florin Nita after Calvert-Lewin was fouled by Vlad Chiriches.

England manager Gareth Southgate says booing will not change what his side believes’There’s probably one decision in my head’ – Southgate close to knowing XI for CroatiaReaction following England’s final game before Euro 2020Mixed reaction as England players take knee before Romania friendlyDid Southgate get the tough calls right?England’s opening opponents Croatia beaten by BelgiumGrealish England’s catalyst againGrealish continues to make an eloquent case for inclusion in England’s starting line-up when they launch their Euros campaign against Croatia at Wembley in seven days.

In a patchy England display, Grealish was once again the brightest attacking spark, creating as well as drawing fouls in dangerous positions throughout.

And it was on one trademark raid into the area that he drew the foul that delivered England their match-winning penalty, giving Southgate and his players the confidence of a second successive victory in this friendly double header on Teesside after Wednesday’s win against Austria.

England will have a series of big hitters, led by captain Harry Kane, back against a wily Croatia side, but Grealish has certainly given Southgate plenty of food for thought in these two games – he has the “X Factor” that can make an impact on big games and switch the emphasis in major tournaments.

Jack Grealish was making his seventh appearance for EnglandSouthgate must now decide whether this is an impact best made from the start or from the bench, with the likes of Manchester City’s Phil Foden and Chelsea’s Champions League winner Mason Mount to also factor into the equation.

Euro 2020: Not reaching the semis a failure – SouthgateHow to follow Euro 2020 across the BBCEverything you need to know about Euro 2020Has Henderson shown enough?Southgate was keen to see Henderson get minutes on the pitch after being absent for so long following groin surgery, especially after he withdrew from the Austria game reporting some discomfort.

It was no surprise to see Henderson introduced at the start of the second half for Leeds United’s Kalvin Phillips.

Henderson looked energetic enough, although the sedate pace of this friendly will be a far cry from the heat of competitive battle against Croatia when the Euros get under way.

Sunday, 13 JuneCroatia14:00Friday, 18 JuneScotland20:00Tuesday, 22 JuneCzech Republic20:00He got himself involved in the action late on when he appeared to pull rank on Calvert-Lewin to take England’s second penalty after the Everton striker had been fouled.

Calvert-Lewin has already scored convincingly from the spot for England, in their win over the Republic Of Ireland at Wembley in November, but Henderson decided the responsibility was his – a poor decision as his spot-kick was unconvincing and at a comfortable height for Nita to save.

It had no impact on the final outcome and of more significance to Southgate will be how Henderson has come through his long-awaited return to action.

Even if Henderson reports no ill-effects, it would still represent a major gamble by Southgate to start him given his lack of competitive action.

“After half-time, I thought we improved and it was helpful we went to 4-3-3 later and I have to say it was a good exercise, players needed the minutes and learned a lot from the game. It was good to win.”

What’s next?All thoughts now turn to next Sunday and England’s opening game of Euro 2020 against Croatia at Wembley (14:00 BST).

Nicolae Claudiu Stanciu (Romania) wins a free kick in the attacking half.

Attempt missed. Ollie Watkins (England) right footed shot from the right side of the six yard box is close, but misses to the right. Assisted by Ben Godfrey following a corner.

Attempt missed. Ben Godfrey (England) header from the centre of the box misses to the right. Assisted by Kieran Trippier with a cross following a corner.

Attempt missed. Tyrone Mings (England) header from very close range is too high. Assisted by Kieran Trippier with a cross following a corner.

Attempt blocked. Jude Bellingham (England) header from the left side of the six yard box is blocked. Assisted by Ollie Watkins.

Tiberiu Capusa (Romania) wins a free kick in the defensive half.

Attempt saved. Dominic Calvert-Lewin (England) right footed shot from the right side of the box is saved in the bottom left corner. Assisted by Jordan Henderson.