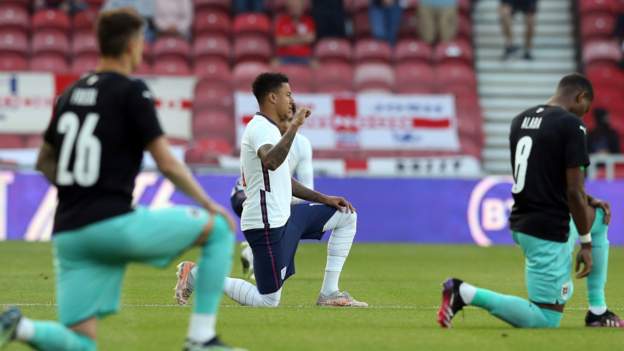 Boos circulated around the Riverside Stadium when players took the knee before England’s friendly win over Austria on Wednesday.

Southgate said at the time “some people aren’t understanding the message”.

Speaking on Saturday, before Sunday’s friendly with Romania, the England boss added: “We feel more determined than ever to take the knee.”

Listen: Daily Euros podcast – England to keep taking the kneeSouthgate excited by England’s youngsters – England v Romania previewDeclan Rice: From Chelsea rejection to England regularPick your England Euro 2020 starting XIEuro 2020: How to follow across the BBCPlayers have been taking the knee to highlight racial injustice.

Southgate spent several minutes of his news conference before England’s final match leading into Euro 2020, talking about the decision to continue.

“Those people should put themselves in the shoes of the young players,” he added.

“How would they feel if their kids were in that situation?

“We accept there might be an adverse reaction, and we’re just going to ignore that and move forward.”

Speaking to BBC Radio 5 Live, Southgate added: “We did discuss if there is a better way of doing this. Is there more an impactful way now of doing this?

“Perhaps moving forward there probably is, but at this moment in time, given what happened the other day, we were not prepared to make a backward step.

Sunday, 13 JuneCroatia14:00 BSTFriday, 18 JuneScotland20:00 BSTTuesday, 22 JuneCzech Republic20:00 BST”We feel that would be wrong and we would be bowing to pressure from outside and we don’t think that is appropriate. We are united on that as a full team.”

Southgate said his players would not be taking questions on the subject during the tournament, which starts on Friday.

“This gesture of taking the knee is a moment for people to reflect really,” he added.

“They can choose to reflect how they choose. You know personally whenever I’m doing it, I’m thinking of the boys that play for us, the journey they have been on.

“The difficulties they have faced in their lives, that sadly they seem almost immune to at times, but at certain other times it hurts.

“It’s my responsibility to represent them the best way I can.”

Midfielder Kalvin Phillips said England’s players were “confused and disappointed” with the jeering against Austria.

Speaking on Saturday, the Leeds United player added: “I was just happy that the boos got cancelled out by the fans cheering in the end, but I don’t think it’s a great situation, especially for us players.

“All we can do is just focus on the game and speak about it afterwards.

“The team spoke about it together and we came up with the conclusion that regardless of what goes on around, we’re still going to participate in the kneeling, and I think that’s a great idea.”