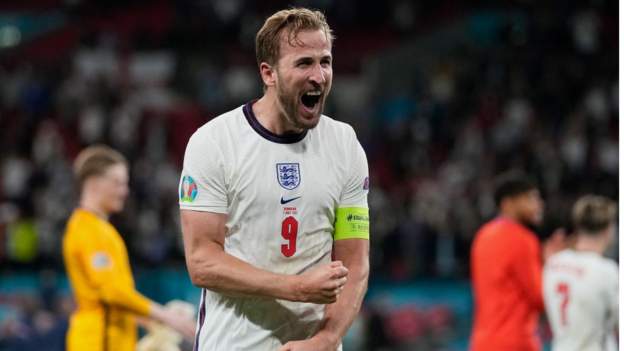 England reached the final of Euro 2020A global audience of 328 million people tuned in to watch the Euro 2020 final, Uefa has revealed.

Gareth Southgate’s England side made it all the way to the final, before being beaten by Italy on penalties at Wembley.

Uefa said the tournament received 5.2 billion cumulative views globally with an average of 100 million per match.

“The incredible TV figures show the massive appeal not only in Europe but worldwide,” Uefa said.

The UK audience peaked at 30.95 million for the final, which was broadcast on the BBC and ITV and an average of 29.85 million watched the whole game between Italy and England.

There were also 7.5 billion interactions across social media platforms and Uefa’s official accounts posted two billion in views during the tournament.

“The tournament has a global audience which continues to grow, in particular in North America and Asia, where the fan base following [the Euros] keeps expanding,” Uefa marketing director Guy-Laurent Epstein said.

“We also note that there is an ever-increasing number of fans accessing matches through streaming services.”

50 Years of Gaming: How did a humble arcade machine become a multi-billion pound industry?Stuck with an event ticket? Find out how you can get your money back for a rescheduled show

Inside DoorDash’s Leadership Accelerator for Women of Color