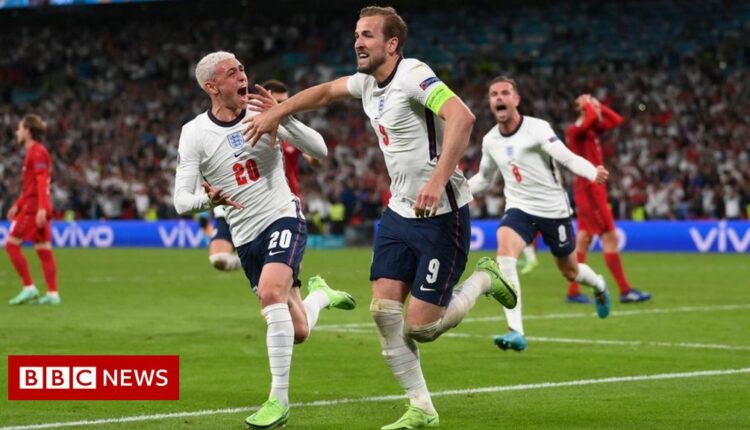 According to overnight figures, the semi-final at Wembley Stadium brought an average audience of 23.86m.

The last five minutes of the match drew a peak audience of 25.71m – almost 5m more than the peak audience recorded during Saturday’s match against Ukraine.

The game was the most watched non-news event since Croatia knocked England out of the 2018 World Cup.

England’s 4-0 win over Ukraine on Sunday attracted a peak TV audience of 20.9m, making it the most-watched live TV event of the year up to that point.

The most watched event of recent years remains the Prime Minister’s May 2020 coronavirus announcement, which was seen by 27.49m viewers across six different channels.

Sunday’s Euros final will be shown on both BBC One and ITV and could break the viewing record set by the 32.3m who watched England win the World Cup Final in 1966.

The official audience for Wednesday’s match may rise when those who saw it via ITV’s catch-up service are taken into account.

image captionDavid Baddiel and Frank Skinner were among the crowd at Wembley StadiumEngland’s players sent the nation into delirium on Wednesday after beating Denmark by two goals to one after extra time.

Striker Harry Kane scored the decisive goal after England were awarded a penalty. Kane’s initial strike was blocked by Danish goalkeeper Kasper Schmeichel but he was able to tuck away the rebound.

Governing body Uefa has since charged England after a laser pointer was directed at Schmeichel as Kane prepared to shoot.

How to set up a Wi-Fi extender