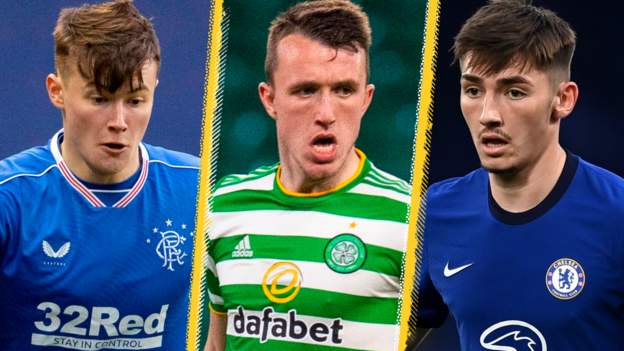 Euro 2020: Who would make your 26-man Scotland squad for this summer’s finals?

Could Chelsea’s 19-year-old midfielder Billy Gilmour sneak into the squad?Time is nearly up for Scotland players looking to impress head coach Steve Clarke enough to break into his Euro 2020 squad.

With the 26-man group to be picked this week, who has already booked their place? Who has an anxious wait? And who might be a late bolter?

A couple of key injuries has thrown the debate wide open again. BBC Scotland looks at the key questions and we ask you to complete your squad for the finals.

Whose bags are already packed?These are the best Scotland can pick from, and those that have consistently started games since Clarke took charge and those who will be part of the squad this summer, injury permitting.

They range from obvious Premier League stars such as Andy Robertson, Kieran Tierney, Scott McTominay and John McGinn, to the settled goalkeeping trio of David Marshall, Craig Gordon and Jon McLaughlin, and take in squad stalwarts such as Stephen O’Donnell.

Despite only making his debut in March, Southampton’s Che Adams now also seems to be among this group, given the lack of depth up front and his strong showing in the recent World Cup qualifiers. And the same goes for Grant Hanley.

Ryan Jack would have been in this batch, too, but the Rangers midfielder’s calf injury means he is ruled out of the finals, as is Kenny McLean of Norwich City, who would also have been a certain pick.

Youth or experience?That leaves 11 places up for grabs in Clarke’s final, extended, squad. But who might get them?

One of the emerging themes is whether to go for youthful options who could gain valuable tournament experience or older heads who are more used to playing regular football on the biggest stages.

The first of those positions that throws up that question is right-back, where 19-year-old Nathan Patterson of Rangers has staked a claim.

He looks to have a big future, so – despite currently serving a ban for a Covid rule breach – is it worth getting him involved and integrated into the senior set-up as quickly as possible?

Or does Sheffield Wednesday’s Liam Palmer, a consistent squad pick by Clarke, represent the safest bet to act as O’Donnell’s understudy on the right of defence?

It’s feasible that Tierney and McTominay could play as two of the three centre-backs, although Jack’s injury might mean the latter is more likely to play in midfield.

Regardless, there are plenty of natural central defenders fighting it out for places. Aberdeen’s Andrew Considine, Declan Gallagher of Motherwell, Leeds captain Liam Cooper, Scott McKenna of Nottingham Forest, and Celtic’s Jack Hendry are those in contention.

Given his performances in the play-off win against Serbia, Gallagher is probably in pole position, but it was McKenna who was given (limited) game time ahead of him in the recent World Cup qualifiers.

Given Clarke can now take 26 players, it might be that both go, as well as one other centre back.

The same considerations will feed into the selections in central midfield, Scotland’s strongest area.

Fans have been clamouring for the inclusion of two young prospects in particular – Chelsea’s Billy Gilmour and David Turnbull of Celtic. Ryan Gauld is also a left-field choice given his exploits for Farense in the Portuguese top flight.

However, on the evidence of previous squads, Sheffield United’s John Fleck will likely claim a place. Clarke rates him highly, and the Scotland boss is not the kind to bow to pressure for a more glamorous option.

The injuries to Jack and McLean, though, might leave the door open for at least one of those first three to squeak in. Gilmour is the most similar in terms of style to Jack and shone recently against Manchester City, but Turnbull and Gauld have played far more games this term.

All three offer something different to one another, with Gilmour arguably providing what Scotland will lack in Jack’s absence – an ability to recycle possession efficiently and progress the ball through the lines from deep.

The forward area is arguably where Clarke has the most thinking to do before finalising his group on 1 June.

James Forrest made his return for Celtic in April after five months out with injury, then suffered a slight setback, but has featured in recent matches. Despite a lack of games, his track record surely demands his inclusion.

With Sheffield United’s Oli McBurnie out of contention, that leaves at least one place for a striker to complement Adams and Dykes.

Callum Paterson, Leigh Griffiths, Lawrence Shankland, and Johnny Russell have all played under Clarke but were not included for the qualifiers in March. Hibernian’s Kevin Nisbet was and, despite having just one cap, is in the best form of the group. Oliver Burke is out with a fractured foot.

However, nobody has built a rock solid case. Might Clarke settle for fewer out-and-out strikers, giving him the option of another midfielder or defender?

Who did you pick last time?When we initially asked the BBC Sport audience to make up their Scotland squad at the end of last month, Turnbull and Forrest proved the most popular picks by the 15,000 who participated.

With McLean now injured and an extra spot up for grabs, does your thinking change? How would you complete the squad? Make your selection below…