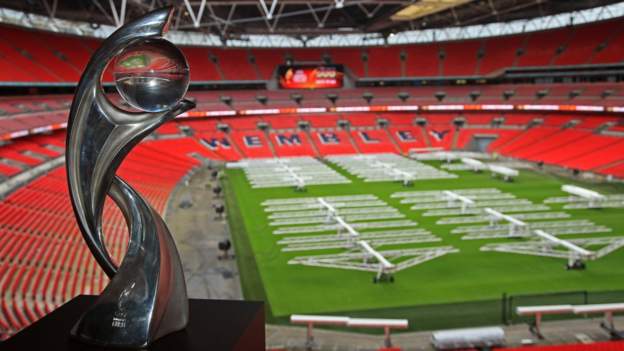 Wembley will host the Women’s Euro 2022 final on 31 JulyThe Football Association has announced plans to sell a record 700,000 tickets for next year’s Women’s European Championship in England.

The tournament’s total attendance record is 240,045 from the last event in the Netherlands in 2017, when the hosts beat Denmark in the final.

The FA also aims to break the record gate for a single Women’s Euro game, currently 41,301 from the 2013 final.

The target is to set the record at the opening game at Old Trafford on 6 July, and again at the final at Wembley on 31 July, when they hope to break the record for a women’s game in Europe of 80,203, set when the USA beat Japan in the London 2012 Olympic final.

The 2022 Women’s Euros will be staged at 10 venues across nine host cities.

“We want it to be the biggest and most successful women’s tournament that’s ever been held in Europe,” Baroness Campbell, director of women’s football at the FA, told the BBC.

“We want to be ambitious, and believe me Uefa thinks 700,000 tickets is incredibly ambitious, but equally we want to be realistic. And we’ll see whether we’ve got that balance right.”

Campbell also says they have made the ticketing strategy “accessible and in the reach of ordinary families”.

“But for me success will be a massive increase in profile across the whole country and much more of a sense that we’ve normalised women’s football,” she added. “You know it’s not something we talk about as an exception.”

Emma Hayes column: ‘It’s not the trophies or medals I go to work for”Rule changers’ – the women who play in men’s teamsA legacy programme has also been announced, aimed at delivering 500,000 new football opportunities to engage women and girls by 2024.

The FA is also committing to several measures such as ensuring that 75% of schools provide equal access for girls to play football within PE lessons and 75% of all grassroots football clubs offer at least one girls’ team, with 1,000 clubs offering a complete accredited pathway for girls.

Across the nine host cities and towns, these measures will result in 120,000 more girls playing in schools and clubs and 20,000 more women playing for fun and friendship by 2024, plus 300 newly FA-qualified female coaches and 350 female referees.

5 Strategies to Infuse D&I into Your Organization

Are Employer-Sponsored Health Plans on Their Way Out?