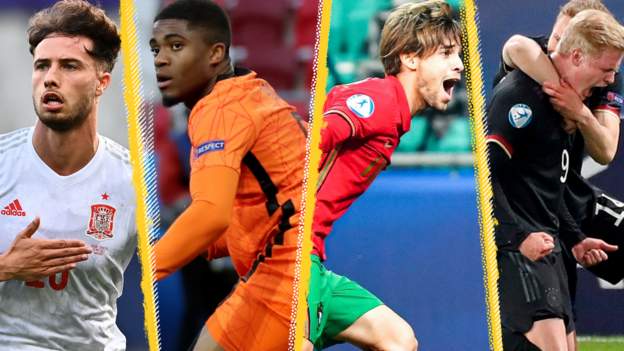 Euro Under-21 Championship: Spain, Netherlands, Portugal and Germany progress to the semi-finals

Germany beat Denmark on penalties in their quarter-final fixtureSpain, Netherlands, Portugal and Germany booked their places in the last four of the Euro Under-21 Championship thanks to quarter-final wins on Monday.

Holders Spain needed extra time to beat Croatia 2-1, with the Netherlands claiming a late victory over France by the same scoreline.

Portugal defeated Italy 5-3 in an extra-time thriller, while Germany were 6-5 penalty shootout winners against Denmark.

Both semi-finals take place on 3 June.

Spain and Portugal, who are two of the favourites to lift the trophy and remain unbeaten in the tournament so far, will face each other at 17:00 BST in Maribor, Slovenia.

The final will be held on Sunday in Ljubljana, Slovenia at 20:00 BST.

The tournament, co-hosted by Hungary and Slovenia, has been split into two stages by Uefa.

Matches for the group stages of the competition were held in March, with the eight quarter-finalists returning to the same venues for the knockout phase this week.

England suffered injury-time heartbreak in the tournament two months ago as a late Croatia goal saw them fail to make it out of the group stages for the second successive competition.

A penalty from Eberechi Eze and a fine strike from Curtis Jones were not enough to secure their progression, as they needed to win by two clear goals.

Attempt saved. Romain Faivre (France U21) left footed shot from outside the box is saved in the bottom right corner. Assisted by Dayot Upamecano.

Attempt missed. Houssem Aouar (France U21) header from the centre of the box is just a bit too high. Assisted by Aurelien Tchouameni.

Attempt blocked. Jonathan Ikoné (France U21) left footed shot from a difficult angle on the right is blocked. Assisted by Romain Faivre.

Attempt missed. Amine Gouiri (France U21) header from the centre of the box misses to the left. Assisted by Maxence Caqueret with a headed pass following a corner.

Attempt missed. Houssem Aouar (France U21) right footed shot from the centre of the box is high and wide to the right. Assisted by Jonathan Ikoné with a headed pass.

Substitution, Netherlands U21. Mitchel Bakker replaces Tyrell Malacia because of an injury.

Attempt blocked. Aurelien Tchouameni (France U21) right footed shot from outside the box is blocked. Assisted by Ibrahima Konaté.

Tyrell Malacia (Netherlands U21) wins a free kick on the left wing.

Foul by Romain Faivre (France U21).

Attempt saved. Aurelien Tchouameni (France U21) right footed shot from outside the box is saved in the bottom left corner. Assisted by Maxence Caqueret.