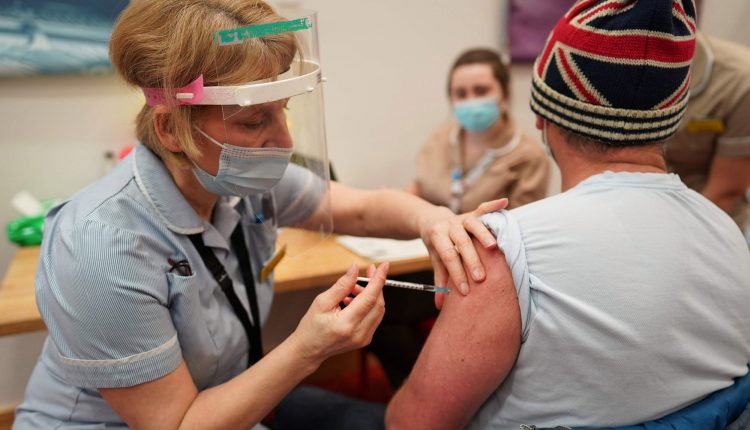 The Health Secretary has promised that every adult will be ‘offered’ a coronavirus vaccine by autumn.

Matt Hancock said people over 18 would be ‘offered’ – but did not say ‘given’ – a Covid-19 jab by that deadline, though he did not clarify when exactly he meant after the summer.

Mr Hancock told the BBC’s Andrew Marr show that the vaccine roll out was now ‘accelerating’ and around 2 million people had been given a jab.

Asked if the government could ‘vaccinate everyone’ by the autumn, he said yes. However, Mr Hancock then clarified: ‘every adult will be offered a vaccine by the autumn, absolutely’.

It comes amid growing uncertainty that the government’s ambitious target of inoculating nearly 14 million vulnerable people by mid-February will be met. The language from ministers has begun subtly changing to ‘offering’ those doses.

As the vaccine rollout gathers pace, more than half a million over-80s are due to receive invites this week to sign up to receive a jab. The first 130,000 invites were due to arrive over the weekend.

There are issues with the UK not currently having enough doses to scale up vaccinations significantly and claims that the NHS is not ‘motivated’ to dramatically quicken its efforts. There are also fears over staff shortages and logistics, with the health service under unprecedented strain amid a huge surge in cases.

The recently-approved Moderna vaccine will not arrive in the UK until the spring, with the AstraZeneca/Oxford jab and Pfizer/BionTech vaccine currently being given to the most at risk groups.

There is some debate around whether to prioritise giving at-risk people a second dose before giving others a first jab.

Approval for Moderna’s jab came as the highly-respected Professor Sir John Bell claimed this week that the NHS has the ‘theoretical capacity’ to immunise ‘everybody’ in five days ‘if they want to’.

The regius professor of medicine at Oxford University told The Times: ‘I don’t get the sense they are really motivated.’

He said: ‘You have to view it as if it were a war. The Israelis are good at getting on a war footing, everyone is waiting for the 2am call anyway.

‘Here it is not clear whether it’s a national security issue, but it is, the economic impact is as bad as any war, you might say 100,000 dead is not as bad as a war but it’s still not where you want to be.’

This morning, Mr Hancock said the roll out had to be done ‘on need’, but repeatedly said everybody in the country over 18 would be offered it by autumn.

Autumn starts on September 22, in around eight and a half months’ time.

The Health Secretary went on: ‘We have got over 350 million doses on order, they are not all here yet and we are rolling them out as fast as they get delivered.

‘But we are going to have enough to be able to offer a vaccine to everyone over the age of 18 by the autumn.’

But he said opening classrooms again did not need to be contingent on vaccinating teachers.

Speaking to BBC One’s Andrew Marr Show, he said: ‘It is very difficult to see how we can start lifting restrictions in any meaningful way until the vaccine programme, at least that first part of it is rolled-out successfully.’

He added: ‘At the moment, we do need to focus on those who are most likely to go into hospital and tragically to die.’