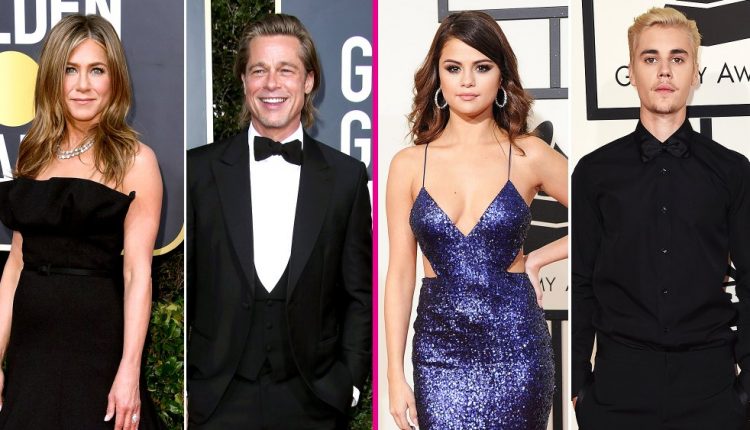 Exes Who Attended Awards Shows: From Jen and Brad to Selena and Justin

So awkward or super supportive? Stars often attend the same awards shows as their famous exes. It’s an occupational hazard. Whether the run-ins go well or not is up to the former couple at hand.

Jennifer Aniston and Brad Pitt, for instance, knew going into the 2020 Golden Globe Awards that they would both be in the audience. The Morning Show star was nominated for Best Performance by an Actress in a Television Series — Drama, while the Once Upon a Time in Hollywood star was up for Best Actor in a Supporting Role in Any Motion Picture.

The former flames set the precedent well before January 2020 that there would be no bad blood on the red carpet. “Jen and Brad are friends and occasionally connect,” a source told Us Weekly in December 2019. “There’s no chance that a potential run-in between Jen and Brad will be tense or uncomfortable.”

As such, Aniston and Pitt were more than cordial, with the Friends alum cheering on her ex-husband when he won his category. According to an onlooker, she “stood up and clapped for Brad’s win” and “sat down before some of the other people who were sitting near her.” The actress even laughed when the Fight Club actor joked, “I wanted to bring my mom but I couldn’t because any woman I stand next to they say I’m dating.”

Other celebrities opt to avoid their previous partners entirely at awards ceremonies. Despite being members of the same genre of music, Blake Shelton and Miranda Lambert rarely attend the same events. Their behavior at the 2019 Country Music Association Awards might signal why.

“Everyone stood up for Blake at the end of his performance except Miranda Lambert and her husband [Brendan McLoughlin],” an eyewitness revealed in November 2019. “At the commercial break, they both left their seats.”

Meanwhile, the Voice coach, who brought girlfriend Gwen Stefani as his date, was more cordial. The onlooker told Us the duo “were nodding their heads” while Lambert performed earlier in the broadcast.

Scroll to revisit the good — and the bad — run-ins at awards shows!