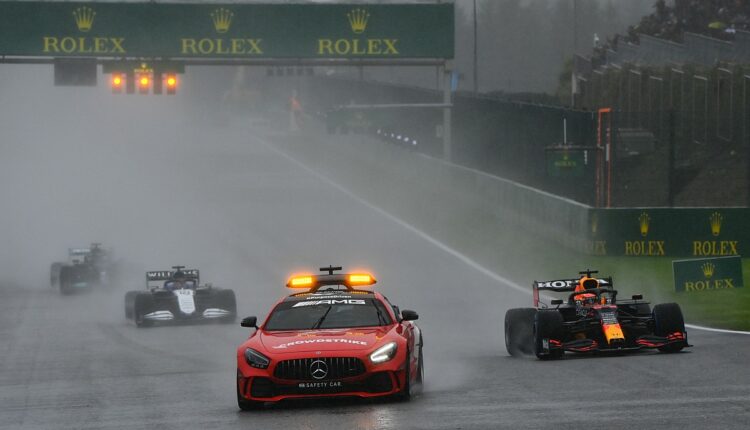 After a long delay due to the wet conditions the event eventually started behind the safety car, but it was then stopped after just three laps. That was enough to ensure that half World Championship points could be awarded to the top 10.

Some observers have suggested that F1 wanted the race to officially start in order to ensure that the commercial deal with the Spa promoter was fulfilled, and thus the full fee paid.

However when asked by Motorsport.com if having no race would have impacted the deal Domenicali denied that that would be the case.

“No, no, at the end of the day,” he said. “That’s why, when I hear that there was some commercial discussion behind that, it’s totally not true, because when we’re talking about racing, there is responsibility, that is a clear process, and those things are not connected at all.”

Asked if F1 would have received its full sanctioning fee without a race he added: “Absolutely. That’s why I said to consider that as something related to a commercial implication is wrong.”

Domenicali said he fully supported the decisions made by FIA race director Michael Masi in waiting for a window in the weather and then stopping the race soon after it had officially started.

“For the people, of course, it’s a shame, because it’s something that everyone wants to see, a proper race,” he said. “But I think that the decisions taken by race control are absolutely correct.

“There was the wish and the will to do the race. And as soon as there was information, I was following what was the situation there, there was a window of possible weather improvement to try to do the race.

“Then as soon as they restarted, the comments were pretty clear, and on the another side another weather forecast received, not possible. Despite the disappointment for everyone, I think in terms of management, it was the right thing to do.”

Asked if he had a message for fans who had paid for tickets he said: “The message is clear, that unfortunately we don’t control the time. Two laps or no laps, the spend was there.

“You need to consider safety for everyone, and that’s very very important. As I said, the first to be disappointed is me, because I love racing, but there are always conditions where you cannot do it.”

Domencali suggested that F1 would work with the promoter to see what could be done for disappointed fans. After the 2005 US GP – when Michelin tyre issues meant that just six cars started – fans received refunds, with the tyre company’s support.

Lewis Hamilton is among those who have called for a similar process to follow the Spa event.

“It’s something that [we can discuss] together with the organiser,” said Domencali. “We are not the ones that are putting [out] the tickets. Some sign of attention could be done, so it’s something that as a gesture of attention, in terms of what will be the right reward in this condition.

“Unfortunately the race is not there. You can pay the ticket and it is what it is. At the end of the day, for sure, the organiser, together with us, will consider the attention, the maximum attention to the fans, that’s for sure.”

He added: “I think there will be ideas that they already are thinking [about], considering what has happened this year.”

Domenicali also confirmed that it would have been impossible to run the race on Monday, a practice that is common in US racing when oval events are rained out.

“That was considered, of course, but it’s not possible. With the promoters, everything is very close, they followed the decision process, so they are not out of that.”