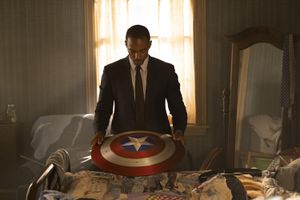 Get outta here, WandaVision. You’ve been done for more than two whole weeks, and now there’s a new Marvel Cinematic Universe show in town. The first episode of The Falcon and the Winter Soldier dropped on Disney Plus Friday to whisk us away on an espionage adventure with two of Captain America’s buddies.

Last time we saw Sam Wilson, aka Falcon (Anthony Mackie), the wingsuit-wearing Air Force vet had been chosen to be the next Captain America and given the iconic shield by an aged Steve Rogers. He didn’t seem too sure about taking up the mantle, though.

On the other side of the show’s title, we have Bucky Barnes (Sebastian Stan), aka the Winter Soldier. Originally Steve’s sidekick during World War II, he spent decades as a brainwashed assassin for sneaky terrorist group Hydra. He’s since been deprogrammed and rejoined the heroes, but getting over the sins of his past isn’t proving easy.

This show takes place in the wake of Avengers: Endgame, when billions of vanished people have returned after a five-year absence and the world is suddenly feeling pretty crowded. Let’s jump over the border into SPOILER territory.

After telling Sam he made “the right decision” in donating Cap’s shield to the Captain America Exhibit in Washington’s Smithsonian Air and Space Museum, the same government official later presents the new Captain America to the world. It’s clearly a kick in the teeth for Sam, who handed over the shield because he reasoned that no one should step into Steve’s role.

There’s also something deeply icky about giving the shield to a white guy after the Black man chosen for the role gave it up.

The government’s new Captain America is John Walker (Wyatt Russell). In a 1980s comic storyline, Walker was chosen for the role in the comics after Steve stepped away due to political interference. Sam was considered for the role there too, but politicians reasoned that people weren’t ready for a Black Captain America — it’s possible they’re thinking similarly in the MCU.

Walker has been both adversary and ally to Cap in the comics, going by names like the rather intense Super-Patriot and more reasonable-sounding US Agent. He’s all about serving Uncle Sam, though, to the point where he’s often been a puppet for morally questionable politicians.

I kinda wish they’d made Ralph Boehner the new Cap, just to mess with us.

When Sam donates the shield, he refers to Steve as “gone.” It’s unclear if Steve is dead or alive at this point — he would’ve been more than 100 years old when he reappeared at the end of Endgame. It’s possible that the Super Soldier formula gave him a longer lifespan than normal, so he could still be in good shape physically.

Sam’s new buddy, Joaquin Torres, mentions a conspiracy theory about Steve being in a secret base on the moon. Maybe he’s next to Attilan, the ruined Inhuman city from that show we all want to forget?! Please no.

It’s likely Marvel Studios hasn’t decided if Steve is coming back yet, so he’s both alive and dead.

Schrödinger’s Cap, if you will.

The opening action sequence in the Tunisian sky feels similar to the start of 2014’s Captain America: The Winter Soldier, from Sam’s confident drop out of the plane to the presence of Georges Batroc (Georges St. Pierre). It’s clearly designed to tell us Sam is worthy of taking Steve’s place, despite his misgivings.

Batroc, the cheeky Charlie, lives to fight another day because he jumped from the helicopter just before it got blown up by a missile. Really lived up to his comic book counterpart’s alter ego — Batroc the Leaper — with that move.

We only get a little bit about the show’s villain group, the Flag-Smashers, in this episode. They’re an anarchist group that preferred the world as it was during the Blip, without borders — one can kinda see where they’re coming from. Pity about the violence.

They gather followers online, and engage in a V For Vendetta-style “everyone wears the same mask” misdirection stunt to pull off a heist. And at least one of them has superhuman strength and reflexes.

In the comics, Flag-Smasher is an individual identity rather than a group. A few people have taken on the role, but their common goal was spreading anti-nationalist sentiment through terrorist acts. The original, Karl Morgenthau, took particular umbrage with Captain America, seeing him as a symbol of American ideals.

We see Bucky “making amends” for his dark deeds as Winter Soldier, including taking down a corrupt senator planted by Hydra. (I could watch a whole series about his decades working for Hydra.)

He tells his therapist he had “a little calm in Wakanda” — he was deprogrammed there between Captain America: Civil War and Avengers: Infinity War. He was given the name “White Wolf” there, which is about the same level of cool as “Winter Soldier.”

However, in the episode’s biggest emotional gut-punch, it turns out he’s befriended the father of one of his victims. They have a super-fun time hanging out and it even gets Bucky a lovely date, but he’s too wracked by guilt to enjoy it.

It seemed like that date was going pretty well too! I guess it’s date three or four before one tells her about one’s past as a brainwashed murder soldier.

A bit like Cap’s pop culture to-do list, our chilly boy has two sets of names to get through — the first appears to be baddies he has to deal with and the second apparently consists of people linked to his victims.

The most striking name is seen on the former: “H. Zemo.” This is Helmut Zemo, who reactivated Bucky’s programming and used him to drive the Avengers apart in Civil War. Black Panther stopped Zemo from taking his own life after his plan was complete, and he was last seen in CIA custody. This was before the Snap, so Zemo could have escaped or been freed since then.

Join us for more Easter eggs and observations next Friday, when episode 2 of The Falcon and the Winter Soldier hits Disney Plus.

The best silicone rings for exercise and heavy labor in 2021