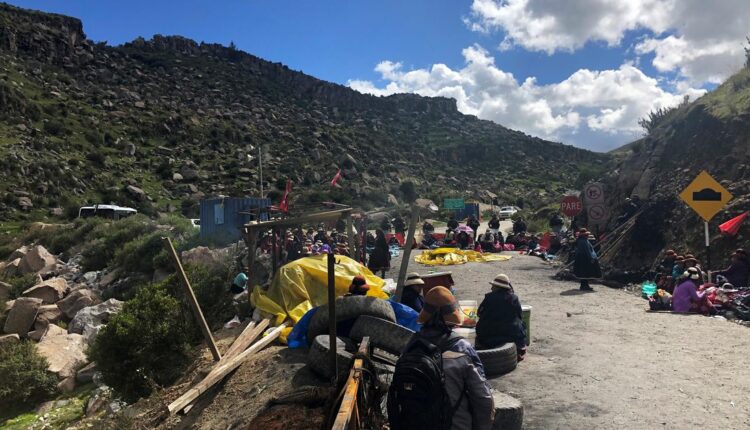 Demonstrators block a road access to a copper mine during a protest in Fuerabamba, Apurimac, Peru March 29, 2019. REUTERS/Mitra Taj

In his first interview since becoming minister on Thursday, he said mines not only need to make money for private companies and generate tax revenue. They should also help the population through improved infrastructure, respect for indigenous communities and better environmental protection, he added.

“A new deal will come out of conversations with all players in the sector, including large, medium and small-scale companies,” Merino said in his office late Friday, a day after taking office with other cabinet members appointed by leftist President Pedro Castillo.

Merino, who had run a conflict resolution firm before becoming minister, said he would develop the mining sector using a “territorial” approach in a country known for its varying regions, cultures and ecosystems.

These “criteria are based on social profitability,” he said. “If the companies comply with that, not only will they develop the projects they have, we will support them in new initiatives.”

Castillo had promised to raise mining taxes to finance greater investment in health and education, but Merino said any new taxes would be decided on a company-by-company basis. “We cannot generalize. You cannot tell a company that already has high costs that it will also have higher taxes,” he said.

Regarding Chinese company MMG Ltd’s (1208.HK) Las Bambas mine, where local communities have blocked roads for more than a week, the minister said the government was willing to “facilitate” dialogue.

Residents of three communities in Chumbivilcas province began the blockade on July 23, claiming that MMG had not been sharing enough of the mine’s benefits. read more

“What I would tell companies is that they should come and invest, and that if they meet our criteria of social profitability, they will have our full support,” Merino added.