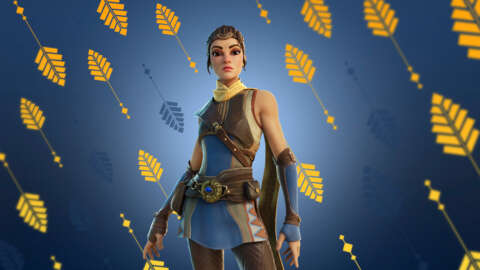 The latest Fortnite skin, Windwalker Echo, may not be as familiar a face as LeBron James or Wonder Woman, but to anyone who saw last year’s Unreal Engine 5 reveal trailer, the action hero will be very familiar indeed. The Windwalker Echo skin is now available in the Fortnite Item Shop for a limited time, marking her first public appearance in over a year.

We didn’t know much about Echo–including even her name–when she was first seen in May 2020’s Unreal Engine 5 tech demo running on a PS5. Her arrival in Fortnite includes a bit more lore for players who want to learn more about her.

For starters, she is what’s called a “windwalker,” which explains her flying squirrel-like ability to glide through canyons. As of today, she also stars in a new animation from Mold3D Studio, which is powered by Unreal Engine and should flesh out her background even more.

When Echo was first revealed, people speculated whether we’d see the hero star in her own game, but at the time, Epic said the experience was merely a demo. While that’s still apparently true, Echo has nonetheless managed to star in a game, even if she happens to share it with a roster of superheroes, singers, and streamers.

As for the Fortnite cosmetics, it’s just Echo herself that’s on offer. Perhaps Epic will work on accessories like back bling, a glider, and a pickaxe down the line. Following a similar schedule for brand-new cosmetics, Echo should be in the Item Shop for at least a few days before she rotates out for weeks or months at a time.

For more on Fortnite Season 7’s final week, don’t miss the Week 14 challenges, which include a tricky one to place warning signs around the island. Fortnite Season 8 is nearly here, so get ready for Operation: Sky Fire.

What Is Shang-Chi’s Ta Lo And Where Does It Fit Into The MCU?