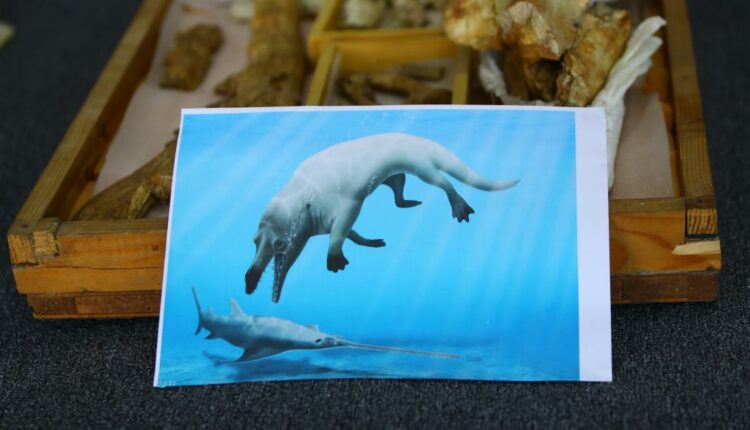 Egyptian scientists say the fossil of a four-legged prehistoric whale, unearthed over a decade ago in the country’s Western Desert, is that of a previously unknown species. The creature, an ancestor of the modern-day whale, is believed to have lived 43 million years ago.

The prehistoric whale, known as semi-aquatic because it lived both on land and sea, sported features of an accomplished hunter, the team’s leading paleontologist, Hesham Sallam, told The Associated Press – features that make it stand out among other whale fossils.

The fossil was first found by a team of Egyptian environmentalists in 2008 in an area that was covered by seas in prehistoric times, but researchers only published their findings confirming a new species last month.

Sallam said that his team did not start examining the fossil until 2017 because he wanted to assemble the best and the most talented Egyptian paleontologists for the study.

Ancient whale with four legs walked on land and swam in the sea, scientists say”This is the first time in the history of Egyptian vertebrate paleontology to have an Egyptian team leading a documentation of a new genus and species of four-legged whale,” said Sallam.

The fossil sheds light on the evolution of whales from herbivore land mammals into carnivorous species that today live exclusively in water. The transition took place over roughly 10 million years, according to an article published on the discovery in the journal Proceedings of the Royal Society B.

Abdullah Gohar, a researcher at El Mansoura university, works on renovating the 43 million-year-old fossil of a previously unknown amphibious four-legged whale species called “Phiomicetus anubis” that helps trace the transition of whales from land to sea, discovered in the Fayum Depression in the Western Desert, near the town of El Mansoura, north of Cairo, Egypt, August 26, 2021.

Egypt’s Western Desert region is already known for the so-called Whale Valley, or Wadi Al-Hitan, a tourist attraction and the country’s only natural World Heritage site that contains fossil remains of another type of prehistoric whales.

The newly discovered creature belongs to the family of Protecetids, extinct semi-aquatic whales that lived from 59 to 34 million years ago, Sallam said. It would have walked on land but also hunted in the water.

“This is yet another new species of early whales from the time when they retained four functional limbs,” said Jonathan Geisler, an expert on the evolutionary history of mammals with New York Institute of Technology.

He said that the location of the discovery in Egypt is also a clue as to when and how they spread around the globe. Geisler was not involved in the find.

The oldest fossil whales are about 50 million years old and are believed to have originated in modern-day Pakistan and India. However, scientists have not been able to reach a conclusive answer as to when whales moved out of their point of origin to all the world’s oceans.

“This new species by itself cannot answer that question, but when viewed in the context of other fossil discoveries, suggests that this dispersal occurred 43 million years ago,” said Geisler, adding the new find could possibly serve as a link between Indo-Pakistan and North American regions.

The fossil whale has been been named Phiomicetus Anubis, after the god of death in ancient Egypt.

“We chose the name Anubis because it had a strong and deadly bite,” said Sallam, professor of paleontology at Mansoura University in Egypt. “It could kill any creature it crossed paths with.”

The new species stands out for its elongated skull and snout that suggest it was an efficient carnivore capable of grasping and chewing its prey, he said. It was about 3 meters (9 feet long) and weighed around 600 kilograms, according to researchers. It is also believed to have had sharp hearing and sense of smell.

His team has previously made headlines worldwide with their 2018 discovery of Mansourasaurus, a new species of long-necked herbivorous dinosaurs that lived in the Nile Delta province of Mansoura.