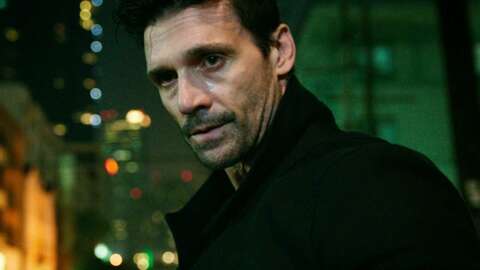 At one point, it was believed that The Forever Purge would be the final installment in the dystopian horror franchise. That’s no longer the case, though. Not only is a sixth Purge movie evidently in the works, but Frank Grillo–who starred in The Purge: Anarchy and The Purge: Election Year–will return to star.

At least, that’s what Grillo says. In an interview with The Playlist, the actor who also appeared in Captain America: Civil War, said another Purge movie is on the way and it centers on his character, Leo Barnes.

“Committed! We committed to doing that–Purge 6 with [James DeMonaco] directing,” he said. “It’s based on the Leo Barnes character. I’m excited. He’s going to send me the script. He just finished it. So, yeah, I’m really psyched about that. I love doing the Purge movies.”

It remains to be seen what’s happened with his character since Election Year. At the end of that movie, the senator he was protecting had been elected President of the United States and ended the annual Purge. However, by the time The Forever Purge rolled around, she’d been voted out of office and the Purge was reinstated. It seems logical to think that the next movie will find Leo after the events of the most recent film, in which a large portion of the United States had decided to purge year-round with no rules. However, no story details have been revealed at this point.

If you haven’t seen The Forever Purge yet, the film is available on Blu-ray and digital release now.