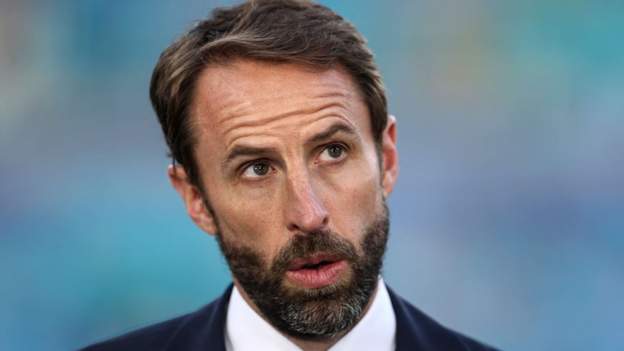 They now return to Wembley – the site of their last semi-final appearance in the men’s Euros 25 years ago.

Speaking to BBC sports editor Dan Roan, he added: “The opportunity to bring happiness and create brilliant nights for our fans, our nation, is a very special one that you have when you play with England.

“They are matches that you remember where you were and some of the nicest messages you get are that people appreciate how the players have been – that they feel they can connect with them – they should be very proud of that.”

Get in touch: Your England major tournament memories ‘Enjoy every minute of moments like this’ – Shearer’England fans transported to unfamiliar world’Victory for England on Wednesday would see them reach the final of a major tournament for the first time since winning the 1966 World Cup.

Asked what it would mean to him to reach the final, Southgate said: “It’s what it means to the country really.

“If you’re a coach it’s a bit like being a parent – you’ve gone past the moment when it’s about you and it’s about what you pass on to others.”

He added the team’s experience of reaching the last four of the 2018 World Cup in Russia could help his side go further this time: “We are better prepared for this semi-final in that we’ve lived it before.

“And although that doesn’t determine winning or losing a game of football, there are a lot of factors that we are aware of and we have dealt with before that help you to prepare in a better way.

“So for example after the game in Rome the celebrations were at a certain level, while probably in Russia to get through the first knockout game, and the quarter-final, took a lot of emotional energy.

“In Rome, everyone was quite calm about what was going on and we knew we hadn’t achieved what we wanted to yet, so those things are what prepare you for a big match like this.”

Euro 2020: Gary Lineker says England have been ‘near to perfect”Hurt’ can inspire England – MaguireThree years ago, England lost that World Cup semi-final, going down 2-1 against Croatia in Moscow.

And Manchester United defender Harry Maguire said they “need to make sure” there is not a repeat of that result on Wednesday.

“The motivation is there,” Maguire said. “Losing the semi-final at the World Cup hurt a lot.”

Maguire, who has recovered from an ankle injury to start England’s past three matches, said Southgate’s squad have improved significantly since the World Cup.

“I think we’re in a lot better place than we were,” he said.

“The experience of that, we’ve learnt from it. We’ve had a lot of big games in that period to improve and a lot of time spent together on the training pitch, friendlies and qualifiers. Every game we play we feel we improve.

“In this tournament, from the first game to the Ukraine game, there’s a lot of differences in the principles that we’re demanding from each other. Of course we’re in a better place now, but we’ve still got a long way to go.”

“We want to create our own history” – TrippierTrippier says the team have “another big task against Denmark in front of us.”Defender Kieran Trippier, whose free-kick goal gave England fans early hope during the 2018 World Cup semi-final, says he has “no regrets” from then and is now focusing on demonstrating the progress they have made since then.

“We are in a position now where we just want to create our own history. That’s all we want to do.

“There are only maybe six or seven of us from the World Cup team. We’ve got so much good young talent.

“It is there for everyone to see the attacking players we’ve got. I think we’ve taken that step forward from 2018”.

The Atletico Madrid player said he will not be letting the occasion get to him when they face Denmark on Wednesday evening.

“Everyone is buzzing and it’s just good to see smiles on everyone’s faces and after the year-and-a-half that we’ve all had it’s good to them all smiling again.”

Beckham’s biggest challenge: A race to play football in all seven continents The rise and fall of a super-influencer: A shocking true story of a con artist and her global following

Mod of the Month May 2021 in Association with Corsair