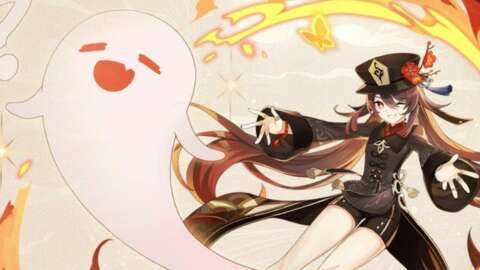 Mihoyo has confirmed that the final character banner for Genshin Impact’s update 1.3 will feature 5-star Hu Tao, a pyro polearm user who is the director of the Wangsheng Funeral Parlor. While Hu Tao was expected to arrive during update 1.3 after being revealed by dataminers, her character banner wasn’t announced with the others when the update was released.

Update 1.3, Mihoyo’s latest big content drop for Genshin Impact, hasn’t followed the formula players have come to expect from the game. Instead of two character banners it featured three, shorter ones, and the last one has been kept a mystery until now, only a few days before it’s due to launch.

Hu Tao has mostly been mentioned as part of other characters’ voice lines until now, though her artwork, character model, and idle animation had already been unearthed by dataminers. Hu Tao’s abilities include a HP-consuming stance that converts all her damage to pyro damage and marks enemies to deal extra damage, while her Elemental Burst restores HP based on the number of enemies hit by its AOE attack.

While it’s unusual that Hu Tao’s banner wasn’t announced with the other two banners at the start of Update 1.3, players have theorized that Chinese developer Mihoyo didn’t want to announce a character who is associated with death during Lunar New Year celebrations. The first Hu Tao teaser was posted right when Genshin Impact’s in-game Lunar New Year event ended.

The banner, which is due to arrive on March 2, will also come with a new story quest for Hu Tao, Papilio Charontis Chapter. A new mini event named “Vishaps and Where to Find Them” will also start on March 5, featuring daily expeditions assigned by Katheryne of the Adventurer’s Guild.