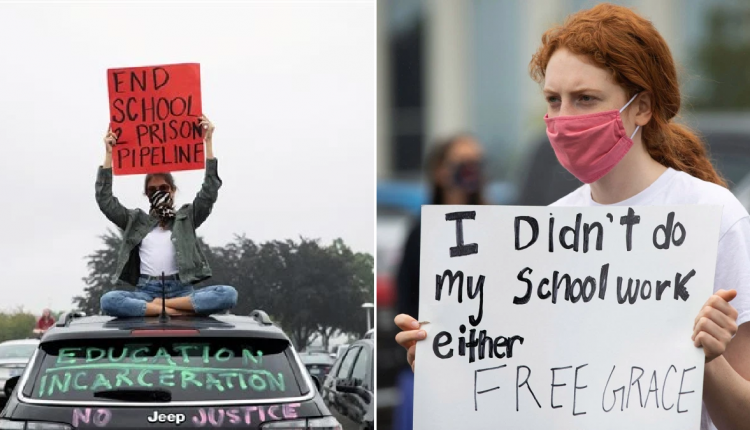 A 15-year-old girl who has been jailed for over two months after she failed to do her online homework has been ordered to stay behind bars.

On Monday, Oakland County Judge Mary Ellan Brennan said that the girl, who is black, has been benefiting from a residential treatment program at the juvenile correctional center where she has been living since mid-May.

Judge Brennan, the head of the court’s Family Division, set another hearing for September, WDIV reported, meaning the girl will remain incarcerated until then.

The girl has only been identified by her middle name, Grace, and her case caused outrage after ProPublica Illinois reported on it last week.

During Monday’s hearing, Brennan told Grace that it was best for her to stay in the program because she had been making positive changes during her time behind bars.

‘Give yourself a chance to follow through and finish something,’ the judge said, according to Detroit News.

‘The right thing is for you and your mom to be separated for right now.’

Grace did not agree with the judge’s order and begged to be freed.

‘I miss my mom. I can control myself. I can be obedient,’ the girl said.

Following the hearing, Jonathan Biernat, a lawyer for the family, said he has made progress in the case, but the ‘fight for her release’ is ongoing.

Grace was reportedly a sophomore at Grove High School in the Birmingham Public Schools before her incarceration. On Monday, Brennan said there had been three incidents between Grace and her mother that required police intervention, which he said was essentially the reason for Grace’s detention, despite reports that the girl was jailed for refusing to do her homework.

‘My role is to make decisions that are in this young lady’s best interest, period. I took an oath that I would not be swayed by public clamor or fear of criticism.’

U.S. new COVID cases down 21% in past week, deaths fall from peak