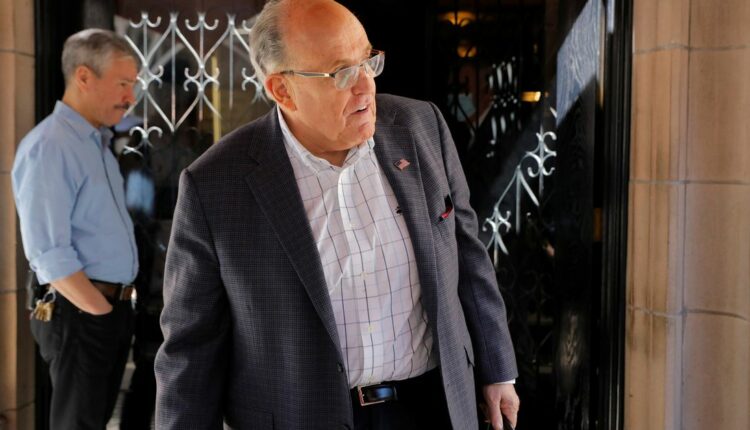 (Reuters) – Rudy Giuliani’s Washington, D.C., law license is under formal review stemming from his involvement in election-related litigation, according to attorney discipline records reviewed by Reuters.

The D.C. ethics investigation, which has not been previously reported, is separate from an attorney misconduct probe in New York related to Giuliani’s election claims. A New York court suspended Giuliani from practicing law in June, finding that the Republican former Manhattan U.S. attorney had made “demonstrably false and misleading” statements against the integrity of the 2020 presidential election.

Attorney ethics investigations are generally confidential absent the filing of a formal charge by a disciplinary authority. Giuliani’s lawyers revealed the D.C. investigation in a July filing at the D.C. Court of Appeals seeking unsuccessfully to overturn the temporary suspension.

Giuliani’s lawyers, Barry Kamins and John Leventhal of the New York firm Aidala, Bertuna & Kamins, did not return messages seeking comment on Friday about the D.C. investigation. Giuliani could not be reached for comment.

Hamilton “Phil” Fox III, who leads the D.C. disciplinary counsel’s office, said he couldn’t comment on any investigation of Giuliani. Available court records do not show whether Fox’s office initiated the investigation on its own or was spurred by a complaint.

Bar regulators in D.C. are weighing statements Giuliani made in November on behalf of Republican then-U.S. President Donald Trump in an election-related case in Pennsylvania federal court, the attorney discipline records show. Giuliani, who appeared based on his New York law license, presented oral arguments.

A federal judge on Nov. 21 ruled against Trump, saying the “court has been presented with strained legal arguments without merit and speculative accusations.”

It’s not uncommon for bar investigations to proceed in parallel in different jurisdictions. Individual state bars can impose their own discipline, ranging from an informal admonishment to disbarment.

Bar regulators also can seek to impose “reciprocal” discipline, applying punishment that originated in another state.

The D.C. Court of Appeals issued its temporary suspension of Giuliani’s license on a reciprocal basis, but not based on the D.C. disciplinary counsel’s original investigation.

Giuliani is an inactive member of the D.C. bar who does not hold himself out as licensed to practice here.

Still, his lawyers failed to convince the D.C. court to lift the temporary suspension. They had argued the D.C. order was premature, issued before Giuliani had mounted a challenge in New York.

The D.C. Court of Appeals last week ruled against Giuliani.

“The New York court found uncontroverted facts establishing a basis for suspending respondent to protect the public,” the court said in its July 26 order.

The court, responding to a sealed request by disciplinary counsel, also allowed the D.C. ethics investigation to continue.

Fox’s office on Dec. 23 asked Giuliani to respond to “certain allegations about his conduct and claims made regarding the 2020 presidential Pennsylvania election in the case Trump v. Boockvar,” Giuliani’s lawyers wrote in a D.C. Court of Appeals filing on July 8.

In an affidavit in the New York ethics case, which was included in the D.C. proceedings, Giuliani told investigators he “did not knowingly or intend to deceive or misrepresent any facts that I have presented to any court, any legislative hearing or to the public.”

Report shows reasons for concern about animal operations near produce