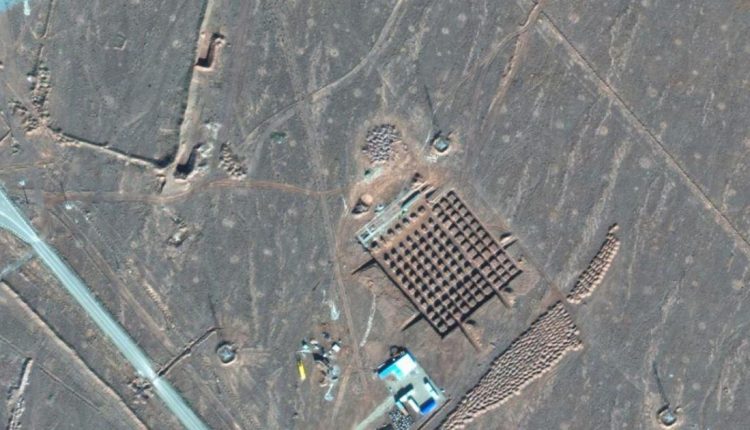 The international nuclear watchdog agency told the U.N. Security Council on Tuesday that Iran is advancing its nuclear program and making a point of doing it in plain sight. That will further complicate plans for the incoming Biden administration, which hopes to steer Iran back into compliance with the 2015 Iran nuclear agreement — and then bring the U.S. back onboard, too.

The International Atomic Energy Agency (IAEA) said Tehran has continued to “reduce its commitments” to restrictions imposed by the agreement.

The confidential IAEA report obtained by CBS News says Tehran has started to manufacture equipment used to produce uranium metal at a facility in Isfahan. Uranium metal can be used to make the core of a nuclear warhead, but it’s unclear yet when or if Iran might start producing the material.

The 2015 accord prohibits Iran from producing uranium metals for 15 years, and has additional curbs on Tehran conducting research and development on uranium metal in certain facilities. The IAEA’s report says Iran is making its departure from those commitments clear.

Iran informed the IAEA, the report states, that “pursuant to steps taken by Iran to reduce its commitments” under the nuclear accord, “there is no limitation” on research and development activities. Tehran claimed its new efforts fall under its civilian nuclear program, but the effort to portray the work as peaceful doesn’t negate the violation of the nuclear deal.

Iran’s representative to the IAEA noted the work in a tweet on Thursday, too, saying “R&D activities related to the design of an improved type of fuel for the Tehran Research Reactor has started. Natural uranium will be used to produce uranium metal in the first stage.”

R&D activities related to the design of an improved type of fuel for the Tehran Research Reactor started. Natural uranium will be used to produce uranium metal in the first stage. @iaeaorg received the updated DIQ for Fuel Plate Fabrication Plant and conducted an inspection.

“There is a clear and urgent need to ensure [that] a robust arms and missile technology embargo against Iran is upheld and enforced,” said Erdan, who will present his credentials to President Joe Biden, soon after Mr. Biden’s inauguration, to serve also as Israel’s ambassador to the U.S.

Naysan Rafati, senior Iran analyst at the International Crisis Group think tank, told CBS News that the IAEA report, “following on Tehran’s decision to raise enrichment to 20% earlier this month, definitely underscores the importance of reversing Iran’s [nuclear accord] breaches and defusing a non-proliferation crisis that’s slowly built up since 2019.”

President Trump unilaterally withdrew the U.S. from the nuclear deal with Iran in 2018. Mr. Biden and his top national security aides have outlined their intention to reenter the pact, if they can convince Iran to return to compliance. But achieving that now looks more difficult than it was even in November, when Mr. Biden was elected.

Iran insists that the harsh sanctions imposed by the Trump administration since its withdrawal from the agreement be lifted before it returns to compliance.

In addition to the ongoing nuclear advancements, Iran has continued to apply pressure with overt displays of its conventional military abilities. On Thursday, the second day of a military drill, a spokesman said Iran had test fired a number of surface-to-surface missiles at targets in the Gulf and Indian Ocean.

“Enemies should know that any violation and invasion of Iranian marine borders will be targeted by the cruise missiles from both coast and sea,” proclaimed Admiral Hamzeh Ali Kaviani, a spokesman for the military exercise.

The IAEA’s latest report followed Iran’s announcement that it had begun enriching uranium to 20% purity at its Fordo nuclear plant, an underground facility designed to withstand foreign attacks. Twenty percent is just one technical step away from nuclear weapons grade levels of around 90%.

Before the recent developments, citing Mr. Trump’s withdrawal from the agreement, Iran had been enriching uranium up to 4.5%, a violation of the accord’s limit of 3.67%. Experts say Iran now has enough uranium stockpiled for at least two nuclear weapons, if it should chose to pursue them. Iran maintains its program is peaceful and that it has no desire for nuclear weapons.

But as IAEA chief Rafael Mariano Grossi told CBS News, “once you start enriching and you move closer to 20% or figures around that, the process of getting your uranium enriched at that level, which is of military quality, becomes easier, becomes faster.”

He said the U.S.’ unilateral withdrawal from the international nuclear agreement with Tehran had intensified the danger of Iran’s nuclear program. “From that moment,” he said, Iran “decided to gradually start diminishing its compliance.”

Last week, the foreign ministers of Germany, France and the U.K. issued a joint statement saying they were “deeply concerned” about Iran stepping up its uranium enrichment to 20%.

But the International Crisis Group’s Rafati sounded a cautiously optimistic note: “If the Biden administration pursues re-engagement with the aim of reviving the existing agreement, a path should be there for working with Iran and the deal’s other parties to undo the damage fairly swiftly.”

“We are at a critical juncture,” a Security Council diplomat of a nation involved in the 2015 negotiations told CBS News. “There is still the hope that as soon as February, things can move in a different direction.”

Doctor who caught COVID-19 variant vows to ‘vigorously defend’ against…

‘Anything is possible:’ Women of colour inspired to dream big by Kamala…

B.C. man wanted in connection with Manitoba murder arrested after months on the run

Subway can proceed with $210M defamation suit against CBC over chicken report,…