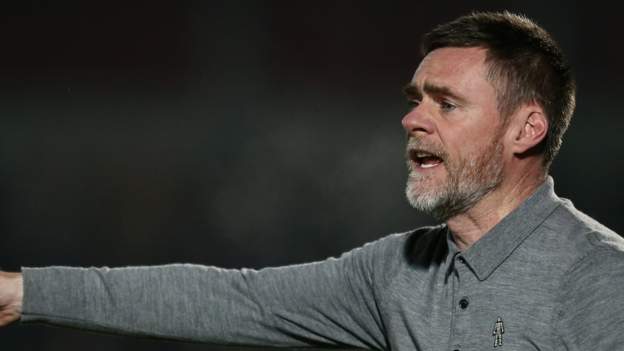 Paul Scholes won one of his seven games in charge of Oldham Athletic during a 31-day stint as manager last yearSalford City have sacked boss Graham Alexander and put ex-Manchester United player Paul Scholes in interim charge.Alexander, 49, led the club to promotion to the English Football League in his first season in 2018-19.He leaves the club in fifth place in League Two, having gone unbeaten in their first five games this season.Scholes is one of the club’s part-owners along with former United team-mates David Beckham, Ryan Giggs, Nicky Butt and Gary and Phil Neville.Scholes’ only previous experience in management was 31 days as boss of hometown club Oldham Athletic in 2019.He resigned from his position as he was “not able to operate as I intended”.His first game as Salford boss will be Saturday’s trip to Port Vale.Analysis – ‘Style of play did not match expectations’BBC Sport’s Simon StoneThe club only won seven of its final 20 games last season, meaning it was outside the play-off zone when the campaign was brought to an early end.And, while they are unbeaten so far this season, on Saturday they only drew at home to a Tranmere side who had asked for the game to be called off due to the number of players they had missing for coronavirus-related reasons.In addition to disappointing results, it was also felt the style of football Alexander’s team was producing did not match expectations.It is understood Salford’s head of youth development, Warren Joyce, would have taken over but he is currently isolating.Scholes is not thought to be a contender to take the job on a full-time basis.
Read More

Jeff Goldblum, 67, Is The Ultimate Thirst Trap After Recreating His Shirtless Scene From ‘Jurassic Park’