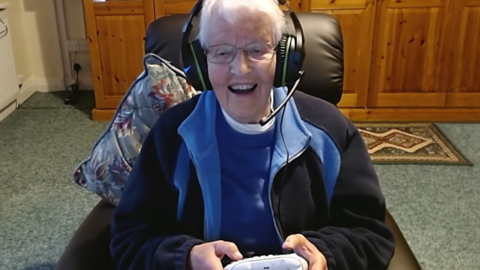 Grandmother And Grandson Use Xbox To Finally Connect

It’s never too late to learn how to play video games–or connect with family you’ve never truly gotten to know. That was the case for Mary, a woman from Bolton, England who finally began to learn about her grandson Jason via Xbox Live. In the past, they had barely interacted, and Jason only knew what his parents had told him about her. But how ironic that it would be a pandemic that kept people apart that brought them closer together?

In a video posted by Xbox on February 5, grandmother Mary and grandson Jason–who live hours apart and have never really known each other–finally get to learn about each other through gaming. Mary received an Xbox Series S so she could play Minecraft with Jason, who ran her through how to use the controller and play the game over voice chat.

Over the course of several weeks, Jason learned about Mary’s life, including her large family that included five siblings. Meanwhile, Mary learned how to race across the English countryside in Forza Horizon 4, and she also explored the wide-open water with Jason in Sea of Thieves. It seemed to help her fend off loneliness during the ongoing pandemic. With lockdown in various parts of the world approaching 12 months now, that human connection is extremely important.

“I enjoy his company and I’m just happy that he wants to be with me, Mary said.”

Jason was happy to finally learn about his grandmother, too.

“I’ve talked to her more in this timeframe than I have … ever,” Jason added.

With the pandemic keeping our family apart, I’ve also turned to gaming as a way to connect with them. My dad and brother now both have Xbox One S systems, and despite the former’s novice skill levels, it’s been the perfect way to stay in contact.