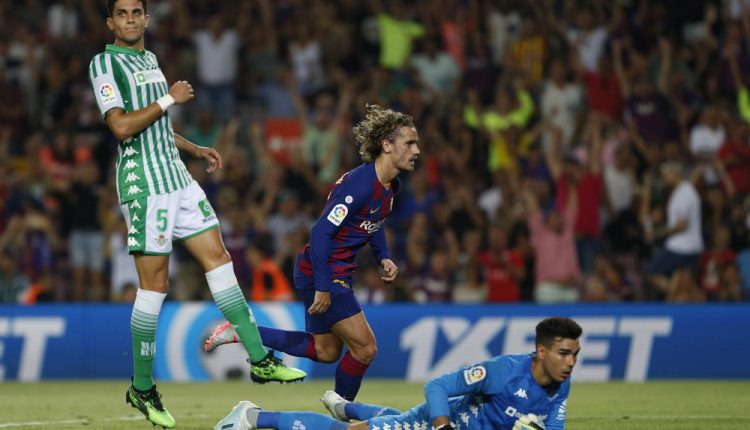 Antoine Griezmann responded to the challenge laid down by coach Ernesto Valverde with a brilliant display as Barcelona came from behind to thrash Real Betis 5-2. Valverde called for Griezmann to be more involved in the game following an ineffective debut in the opening-day loss at Athletic Bilbao and the Frenchman delivered with two goals and an assist at the Nou Camp. Barca went into the game without the injured Lionel Messi, Luis Suarez and Ousmane Dembele and found themselves a goal down early on, but Griezmann equalised shortly before half-time and curled in a superb second early in the second half which had Suarez and Messi beaming their approval. Lionel Messi and Luis Suarez were keen spectators in the stands (Joan Monfort/AP) Goals from Carles Perez and Jordi Alba made sure of the points before Griezmann set up substitute Arturo Vidal for the fifth, although the best – and last – goal of the night was a 25-yard screamer from Betis’ Loren Moron. Barca started brightly and Griezmann saw a seventh-minute shot deflected wide before the same player hit a first-time effort from the edge of the area straight at goalkeeper Dani Martin. However, it was the visitors who took the lead against the run of play, Sergio Busquets giving the ball away with a careless pass in midfield and Loren playing a superb pass through to Nabil Fekir, who coolly scored into the bottom corner. The home fans must have feared the worst and their mood was not improved when Busquets set Alba away down the left and his cross was pulled back for Rafinha to seemingly face the simple task of sidefooting home, only for Brazilian defender Sidnei to deflect the ball for a corner. This kid can play. 👌 Carles Perez with the third as @FCBarcelona turn on the style! 💙❤️#BarçaRealBetis pic.twitter.com/qTforEFy9x — LaLiga (@LaLigaEN) August 25, 2019 Betis could not survive until the interval however as Sergi Roberto clipped a superb ball into the area for Griezmann to meet with a sliding left-foot volley which Martin got his hand to but was unable to keep out of the net. Seconds later Barcelona should have been in front as Perez swept the ball in from the right, but Rafinha seemed to be caught in two minds and ended up failing to get a decisive touch from six yards out. The home side started the second half as they had finished the first and it took just four minutes for Griezmann to score his second of the game, the 28-year-old curling a sublime shot into the far corner from just outside the area. GRIZIHASARRIVED 💯💯💯#BarçaRealBetis pic.twitter.com/gIdp1kfZUd — LaLiga (@LaLigaEN) August 25, 2019 The superb finish was thoroughly enjoyed by Messi and Suarez in the stands and it was not long before they were celebrating another goal, Perez steering a low shot into the corner after being set up by Nelson Semedo. With the points in the bag Barcelona’s players were beginning to really enjoy themselves and Alba made it 4-1 on the hour mark, firing home after being played in by Busquets. Griezmann then turned supplier as he set up Vidal to rifle a shot into the roof of the net but the visitors had the last word with Loren’s stunning drive which flew past Marc-Andre Ter Stegen into the top corner. Topics Barcelona, Real Betis, Antoine Griezmann, Spanish La Liga, Barcelona, Real Betis Griezmann announces he is leaving Atletico Madrid Ernesto Valverde hoping Barcelona do not come unstuck against Real Betis again Another Messi hat-trick helps Barcelona extend their lead Valverde admits Messi’s brilliance transcends rivalries after Betis ovation Leandro Trossard reluctant to celebrate goals due to VAR Mauricio Pochettino frustrated as ‘unsettled’ Spurs lose at home to Newcastle 5 things we learned from the weekend’s Scottish football action Bruce delighted with Newcastle after shock victory at Tottenham Nuno plays down busy schedule after Wolves salvage draw against Burnley Lionel Messi signs for Norwegian third division club Jurgen Klopp says Pierre-Emerick Aubameyang has only one weakness – and it’s nothing to do with his footballing ability Ranked! The 10 best centre-backs in the world Tottenham have decided the minimum price they are willing to sell Christian Eriksen for this summer What the hell happened to Alexis Sanchez? How the fireball footballer extinguished over time