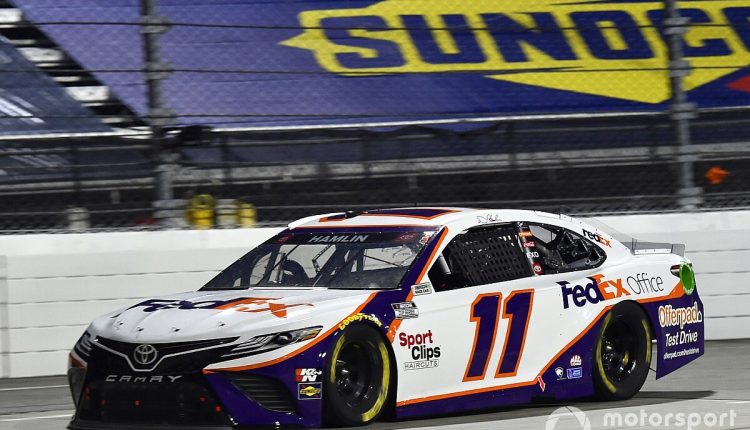 Hamlin: ‘Nothing I could have done differently’ at Martinsville

Hamlin led a race-high 276 laps and had the speed to retake the lead on the final restart, but just couldn’t hold back Martin Truex Jr. as the laps ticked away.

“I thought it was a matter of time,” he admitted. “With about 25 to go or so, he already got into my rear bumper, kind of beating the back end off. It was just a matter of time.”

He added that Truex was just able to turn the corner better than the No. 11 team during the final run, finally relinquishing the race lead to his teammate with 14 laps remaining.

Despite no victories yet, it has been a very impressive year for the Joe Gibbs Racing driver. He’s scored seven top-five finishes in the first eight races and holds an average finish of 4.5.

Even still, there’s always been one or two cars that were able to best Hamlin in the closing moments of every race so far.

“Yeah, I mean, we definitely would like to have more (playoff points), for sure,” he said. “But the way we’re running, we can win any given week. We’ve just gotten beat by one or two cars each and every week that have just hit the setup a little bit better than we did.

“But it’s hard to complain. I don’t know what the record is for most points scored in eight races, but I think we pretty much got to be there (laughter). We don’t finish any worse than third in every stage, obviously we’re finishing in the top three or four every race.

“Just keep building on that, look at the positives, try not to be negative. Wins, we’re getting closer. We’re getting there. We just got to — nothing saying we can’t win the next three races in a row.”

Hamlin remains atop the regular season points standings, but sits eighth in the playoff points behind this year’s seven winners.