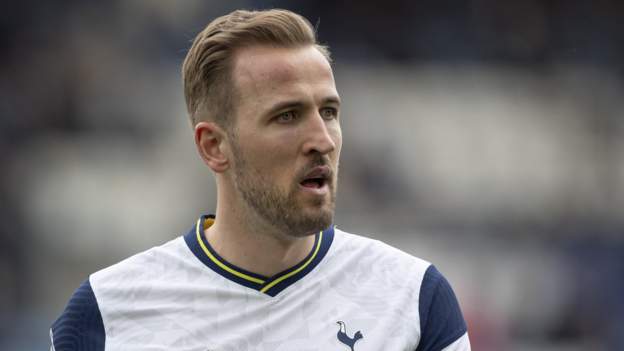 New Tottenham manager Nuno Espirito Santo says Harry Kane is “our player” and will speak to the England captain when he returns to the club.

Striker Kane, 27, is said to believe he has a gentleman’s agreement allowing him to leave the club this summer.

Kane is currently on holiday after leading England to the Euro 2020 final, where they were beaten by Italy.

“Now is the moment for him to recover his energy and rest. Then we can speak,” said Portuguese boss Nuno.

Speaking at his first news conference since being appointed as manager, Nuno said: “Harry is our player. Period. No need to talk about anything else, I am looking forward to him joining the group.

“Harry is one of the best players in the world. That is all I need to say.”

He also confirmed that Gareth Bale will not be coming back, having spent last term on loan from Real Madrid.

“He will not be part of our squad,” said Nuno of the 32-year-old Wales international.

BBC Sport understands there were talks leading towards City making a formal offer, but sources from both clubs distanced themselves from suggestions an official £100m bid has been lodged.

Reports in May suggested that Kane had reiterated his desire to leave the club.

Nuno added: “What I wish is for Harry to recover well, to have a good rest and when he arrives he will feel that every one of us needs to commit themselves to becoming better.

“We are very ambitious people. We want to do it well. We count on Harry on that.”

When does Premier League season start and other key questionsHojbjerg named in Euros team of the tournamentI am so happy – NunoNuno joined Spurs after four seasons at WolvesTottenham underwent a painstaking process to appoint a new manager in place of Jose Mourinho, who was sacked in April.

Eventually they opted for Nuno, who left Wolves at the end of last season.

The Portuguese enjoyed a successful spell in Wolverhampton, winning the 2017-18 Championship title in his first season before twice leading them to seventh in the Premier League and finishing 13th last term.

“We want to make our fans proud. We want them to enjoy our team and our players. We want a good atmosphere and I think they will enjoy. Football has to reflect in the mirror what we want to do. I am sure the fans will enjoy it.

“Each group of players has their own characteristics. I am very proud of the work I did for Wolves. But you have to move forward.”