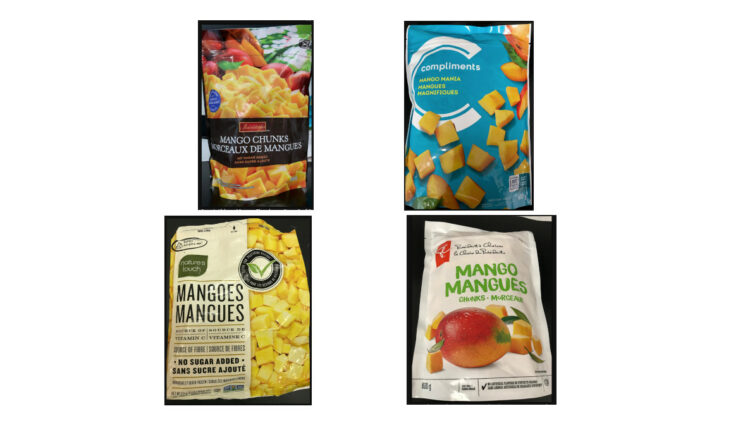 An outbreak of hepatitis A infections has been confirmed in relation to frozen mangos. Patients live in the Canadian provinces of Quebec and Nova Scotia. It is not yet known whether the products were distributed in the United States.

The Canadian Food Inspection Agency posted a recall notice for four products in relation to the outbreak. See chart below for details.

“This recall was triggered by findings during an investigation into a foodborne illness outbreak. The Canadian Food Inspection Agency (CFIA) is conducting a food safety investigation, which may lead to the recall of other products,” Canadian officials reported in the recall notice.

There is urgent concern that consumers may have the products in their homes because of the long shelf life of the frozen fruit — best-by dates stretch through December 2022.

Freezing does not kill the hepatitis A virus, which causes liver problems.

Confirmed patients became sick between late March and mid June, according to Public Health Canada. No hospitalizations or deaths have been reported. The three individuals who became ill are between 23 and 63 years of age.

“It is possible that more recent illnesses may be reported in the outbreak because there is a period of time between when a person becomes ill and when the illness is reported to public health officials. For this outbreak, the illness reporting period is between two and six weeks,” according to an outbreak notice from the public health agency.

“If you suspect you have been exposed to recalled products , or have symptoms consistent for hepatitis A, see your health care provider immediately.

“Vaccination can prevent the onset of symptoms if given within 14 days of exposure.”

Distribution details are incomplete, with some indication that the frozen mango chunks may have reached consumers and restaurants nationwide. The CFIA reports that it is known for certain that Nature’s Touch Frozen Food Inc. distributed the products in the provinces of Manitoba, New Brunswick, Nova Scotia, Ontario, Quebec and Saskatchewan.

Consumers can use the information in the chart below to determine whether they have the recalled mangos in their homes.

Food contaminated with the hepatitis A virus may not look or smell spoiled. Also, people who are infected are contagious before symptoms begin.

Symptoms of the infection usually start 15 to 50 days after the contaminated food is eaten. It sometimes resolves without treatment in a week or two, although it can last up to six months in some people. Symptoms include inflammation of the liver, fever, low appetite, nausea, vomiting, diarrhea, muscle aches, and yellowing in the whites of the eyes and the skin (jaundice).

“If you have been exposed to hepatitis A, it is possible to spread the virus to other people before you experience any symptoms,” according to Public Health Canada.

Anyone who believes they may have eaten or handled the recalled frozen mango products should monitor themselves for symptoms for 50 days.

What consumers should do
Public Health Canada urges consumers to follow these steps.

The following products are subject to the recall.

Cyclospora infections continue to increase; no common source found yet

Rachel Bloom Shared a Recovery Update After Her Breast-Reduction Surgery

29 Cute, Cheap Swimsuits to Close Out the Summer in Style

I Finally Told My Father the Truth About His Obsession With…