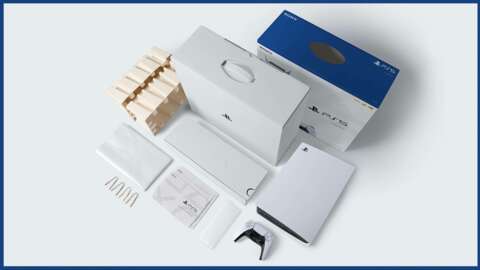 Here’s How Sony Made The PS5’s Packaging Fully Recyclable

When you get your PS5–if you’re lucky enough to find one–you’ll notice that its packaging is different from other consoles, particularly the much flashier design of the Xbox Series X box. It lacks some of their elegance in favor of a simpler design, but this was not a matter of designers phoning it in. Instead, this was a conscious decision by Sony to make the entire box recyclable, and it managed to do so without sacrificing protection. In fact, it’s just part of a larger company-wide push toward greener practices.

In a post on the Sony Interactive Entertainment website, director of environment and technical compliance Kieren Mayers said that Sony has committed to eliminating plastic use in small product packaging by 2025 in an effort to cut down on ocean pollution. In the case of the PS5, Sony was able to do this by making fairly minor adjustments to the box design. In place of plastic trays are card inserts and “paper pulp cushion trays,” and the plastic cable ties we’ve seen for so long have been replaced by paper ones. If you opened up any PS5 accessories’ boxes, that change was made for those, too.

Instead of gluing hanger tabs for the outer portion of the packaging, folding techniques were used, and unnecessary plastic bags holding things like cables and manuals were removed. One feature of smaller boxes–plastic display windows–had to be eliminated outright, but we all know what a PS5 controller looks like.

Video game companies have made some steps to reduce plastic waste in the past, such as when game cases began getting cutouts and thinner materials. However, other, newer gaming innovations could come with their own problems for the environment. Streaming requires the use of remote data centers using their own power. For Microsoft’s part, it says it will use 100% renewable energy for its data centers by 2025, but others will have to follow suit in order to manage the potential harm. Sony, meanwhile, plans to achieve “zero environmental footprint” by 2050, both for its businesses and products.