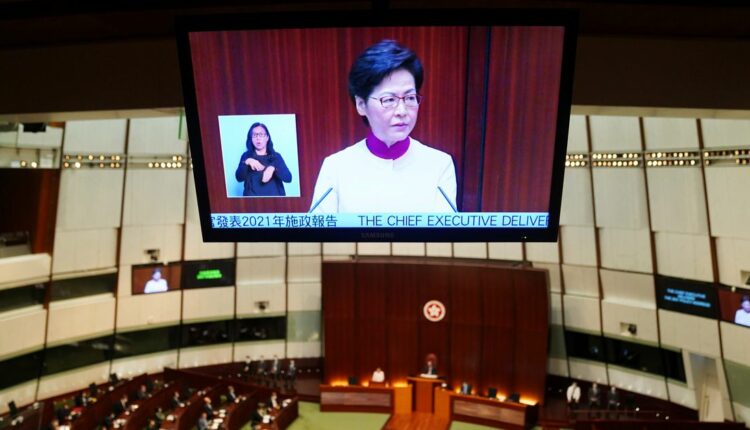 Hong Kong Chief Executive Carrie Lam is seen on a tv screen as she delivers her annual policy address at the Legislative Council in Hong Kong, China October 6, 2021. REUTERS/Lam Yik

HONG KONG, Oct 6 (Reuters) – Hong Kong is at a new start for development under a national security law imposed last year, leader Carrie Lam said on Wednesday as she unveiled plans for tackling a long-standing housing shortage in the Chinese-ruled city.

Authorities in Hong Kong and Beijing have long blamed unaffordable housing in the former British colony for deep-rooted resentment that they say helped fuel anti-government protests in 2019.

At the centre of plans announced by Lam in her last policy address in this term of office is a Northern Metropolis on the border with the mainland’s technology hub of Shenzhen, covering 300 square kilometres.

“Fortunately, the implementation of the National Security Law and the improvement to our electoral system have restored safety and stability in society. Hong Kong is now ready again for a new start for economic development,” Lam said.

Beijing imposed the law in June last year. It punishes what authorities broadly define as secession, sedition and collusion with foreign forces with up to life in jail.

Critics say it is being used to crush freedoms promised under a “one country, two systems” formula agreed when the city returned to Chinese rule in 1997. Beijing and the city government say the law is needed to safeguard prosperity and guard against outside interference.
Lam’s focus in her speech was on ensuring affordable housing for the city’s 7.5 million people, with the highlight the plan for the Northern Metropolis, to be developed into an innovation and technology hub with the creation of more than 500,000 jobs and complementing the city’s role as a financial centre.

“(It) will be the most important area in Hong Kong that facilitates our development integration with Shenzhen and connection with the GBA,” she said, referring to what is known as the Greater Bay Area.

Lam said she was confident that Hong Kong would be able to meet a shortfall of land in the medium to long term with policies including land reclamations and the Northern Metropolis.

Lam later told a news conference about one million housing units could be added to the market in the next 20-25 years, 34% more than the current supply of 2.94 million units.

Hong Kong already plans artificial islands, estimated to cost HK$624 billion ($80.5 billion) – its most expensive infrastructure project – with up to 400,000 units across 1,700 hectares of reclaimed land.

Eddie Hui, associate head of Department of Building and Real Estate at Polytechnic University, said Lam had offered little in the way of short-term measures to ease the housing crunch, and the number of new units she proposed was fewer than he expected.

“Maybe it’s Carrie Lam’s last policy address so she didn’t want to lay out many short-term strategies. I hope the new chief executive will address the issues in detail,” said Hui.

In a sign of Beijing’s concern over housing, Luo Huining, the head of Beijing’s representative office in Hong Kong, last week visited people in subdivided flats and “cage homes” – wire-mesh hutches stacked on top of each other.

Luo’s office said in a statement his heart sank when he saw the cramped conditions and he warned that property had become the city’s main livelihood issue.

Making housing more affordable has been a priority for all Hong Kong’s leaders since 1997, although the prospect of owning a home is still a distant dream for many.

Last month, Reuters reported that Beijing had given a new mandate to the city’s tycoons in meetings this year to pour resources and influence into helping solve the housing shortage. read more

The average waiting time for public housing in Hong Kong has climbed steadily to more than 5.5 years.

Compounding the problem, home prices in old rural areas about an hour’s commute from the city centre have also surged, buoyed in part by mainland parents eager to educate their children in the city.

At the end of her address, an emotional Lam thanked Beijing and her family for support during “unprecedented pressure” she faced since 2019 due to circumstances including the protests and “incessant and gross interference … by external forces”.

“The driving force backing me up in overcoming all these challenges comes from the earnest words of the central government, that it will always provide staunch support to Hong Kong, my pledge to always stand by the side of the people of Hong Kong when I took office, and the unfailing trust and support of my family,” she said tearfully.