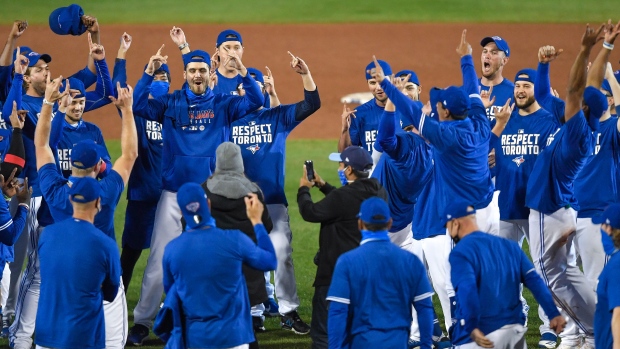 Major League Baseball’s shortened 2020 regular season is over and the post-season opens Tuesday — with the Toronto Blue Jays (surprisingly) in it. Here are the key things to know about this year’s quirky baseball playoffs and how the Jays fit in:

Under the old system, 10 teams made the post-season — the six division winners plus four wild cards (two from the American League, two from the National League). But on the eve of this season, MLB expanded the field to 16. The top two teams in each division are in, plus two wild cards per league. MLB has 30 teams, so more than half made the playoffs. That’s in line with what the NHL and NBA do.

But it’s really just the first round that’s strange. For these so-called Wild Card Series, the playoff teams in each league are seeded 1-8. The top three seeds belong to the division winners, 4-6 to the second-place teams, and 7 and 8 to the wild cards. The No. 1 seed faces No. 8, No. 2 plays No. 7, etc. These are best-of-three series.

After that, the format reverts back to what we’re used to. The winners of the Wild Card Series advance to the Division Series, which are the best of five. Then comes the two League Championship Series, followed by the World Series. Those are all best of seven.

Unlike in this year’s NHL playoffs, teams aren’t reseeded after the first round to ensure the best remaining team gets the easiest possible matchup. Instead, it’s a set bracket:

There are a lot fewer home games

For the first round, the entire series takes place in the ballpark of the higher-seeded team. After that, the eight remaining teams will be assigned to one of four sites. The American League Division Series will take place in San Diego and Los Angeles’ Dodger Stadium. The NLDS are in Houston and Arlington, Texas. San Diego and Arlington will host the League Championship Series, and the World Series is in Arlington.

The idea with all this is to reduce travel and the risk of players/coaches/staff being infected with COVID-19. The regular season got off to a very rough start in that regard. The Miami Marlins and St. Louis Cardinals were both put on ice for long stretches because of outbreaks on their teams, and the ripple effects touched several other clubs. But, apart from a few other isolated positive tests, it’s been relatively smooth since those outbreaks were resolved.

Everyone involved in the post-season is being restricted to the ballpark and their hotel — including the teams playing in their home stadium in the first round. At the same time, MLB is hoping to have fans in the stadium for the NLCS and the World Series. That’s one of the reasons Arlington was chosen to host those. The Dallas Cowboys’ stadium is also in that town, and they had about 22,000 people at their home opener a week ago.

Wait. The Marlins made it?

That’s right. The same Miami Marlins went 57-105 last year and finished last in the NL. And who were picked by many to finish last again? And who had 18 players test positive for COVID-19 shortly after the season began in late July. And who called up a 30-year-old former Olympic speed skater with zero big-league experience as one of the replacements.

This is basically the plot of Major League. And the Marlins pulled off their version of a Hollywood ending by finishing second in the NL East to earn one of the most improbable playoff berths in recent memory.

It’s a great story. But it doesn’t mean the Marlins are a good team. Their minus-41 run differential is easily the worst in the playoffs, and they’re clear underdogs in their first-round matchup vs. the Cubs. Forgive Chicago fans for being a little spooked, though. The last time these teams met in the post-season was the 2003 NLCS — aka the Steve Bartman series.

Who are the Best Teams?

The NL has a definite front-runner. The Los Angeles Dodgers were the most popular pick to win the World Series before the season started, and they head into the playoffs as the clear betting favourite after going an MLB-best 43-17.

L.A. is a truly dominant team, led by one of the best players in baseball in Mookie Betts. The pressure is on, though. The high-priced Dodgers have won eight division titles in a row but have zero championships to show for that run. And there’s a potential nervy second-round matchup lurking vs. San Diego, which posted the NL’s second-best record and has two MVP-calibre infielders in Fernando Tatis Jr., and Manny Machado.

The AL looks more wide-open. Top seed Tampa Bay and the New York Yankees (despite being the No. 5 seed) are co-favourites in the betting markets, but they’re on course to meet in the second round. No. 3 Minnesota took the tough AL Central, but the White Sox might be the best team from that division. They tied Tampa for the top run differential in the AL and have a shot to take down No. 2 seed Oakland in the first round.

A new champion is guaranteed. Last year’s World Series winner, the Washington Nationals, finished last in their division and missed the playoffs.

Do the Blue Jays Have a Chance?

To win the World Series? Not so much. The Jays landed the final AL wild card by finishing third in the AL East with a respectable (and surprising) 32-28 record. But their minus-10 run differential suggests they’re lucky to have that record, and the betting odds reflect that. They say Toronto is the least likely AL team to make it to the World Series, and the most likely to lose its first-round matchup.

But baseball is a pretty random sport and the first round is the best of three, so all the underdogs have a legitimate shot. The numbers posted by the online bookmaker Pinnacle imply Toronto has about a 1-in-3 chance of upsetting Tampa.

Win or lose, the Jays are playing with house money. This was supposed to be another rebuilding year, and the team had to move its home base to Buffalo after the Canadian government refused to let it play out of Toronto. But a combination of the shortened 60-game season, expanded playoffs and some genuinely strong performances resulted in a bonus trip to the post-season.

If you’re just hopping on the Jays bandwagon now, here are some players you might enjoy:

Hyun-Jin Ryu: The Korean lefty turned out to be every bit the ace the Jays paid big money for in a free agency. He went 5-2 with a very nice 2.69 ERA and was probably the team MVP.

Teoscar Hernandez and Lourdes Gurriel Jr.: Besides having fantastic first names, the corner outfielders both had terrific years at the plate. Hernandez led the team with 16 homers (in only 50 games) and stole six bases. Gurriel slugged 11 homers and won the team batting title at .308.

Vladimir Guerrero Jr.: The ultra-hyped prospect didn’t have the breakthrough second season many hoped for. He hit the ball on the ground too much, negating his prodigious power. But Guerrero wasn’t awful, either. He had nine homers in 60 games and finished with a 115 OPS+ (meaning he was 15 per cent better than average at the plate). He also finished the regular season with 12 hits in the last seven games — including two homers. So maybe he’s figured something out.

Bo Bichette: He’s still trying to recapture the pop in his bat after a knee injury cost him a month. Since returning Sept. 12, Bichette has no homers and only six extra-base hits in 15 games. But before he got hurt, the second-year shortstop was a frozen-rope machine and the Jays’ best hitter.

Alejandro Kirk: Last but not least, the stocky rookie catcher has become a cult favourite since making his big-league debut a couple of weeks ago. Kirk has only 25 plate appearances under his belt, but he’s hitting .375 with a homer and a pair of doubles already. He’s an x-factor for the playoffs.

Top Tips For What To Do If Your House Floods