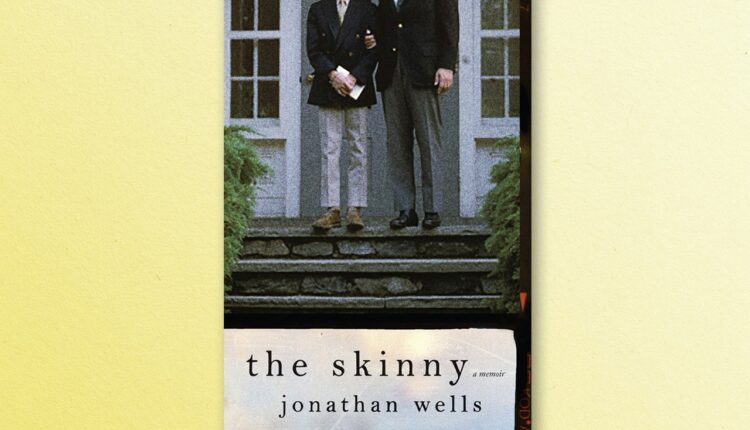 In the new release The Skinny: A Memoir, poet and author Jonathan Wells reflects on a lifetime of other people’s obsession with his weight. In the excerpt below, Wells confronts his father about the painful ripple effects of this decades-long preoccupation with changing Wells’s thinness.

After the meal, Dad took me aside. He was upset. “Why did you do that? I was only trying to help you!”

“Please, don’t try to help me any more, Dad. I don’t want it. I want to figure it out for myself.”

“Any father would do what I did. It’s an instinct. You can’t control instincts. Especially paternal ones. Wait until you have kids and you’re a father. You’ll see.”

He spoke sincerely but his warning was meaningless. I barely thought of myself as an adult, let alone understanding what it meant to be a father.

“Dad, if I was in pain I could understand your taking me to the doctor. But I was never in any physical pain. You manufactured this whole diagnosis. You’ve been trying to fix me and improve me since I was eleven. You have to stop. And you’re forgetting one very important thing.”

The words felt like they were coming from someone else’s mouth. He looked over at me glumly, perhaps hoping that I would disown them as soon as I came to my senses. But we both knew that this time I wouldn’t. His beard turned darker where his cheeks creased. I had never seen him so sad, so chastened.

When I was eleven years old standing next to him at the sink as he shaved, I believed that he was the god of many things; judgment, precision, and divine insight into how the world worked. Now he seemed muddled, unsure of the future, distrustful of the instincts that had brought him so much success. No longer divine, he was simply a human being who had made his share of mistakes, ones he had inherited and others that he had fallen into all by himself. I felt an empathy for him that I had never felt before.

“There was never any confusion between my body and yours,” Dad pressed back. “You were small. You were slight. You needed a push forward toward growth. Toward energy and structure. You needed to learn what hustle was. What need was. That is what a father is supposed to teach. Why are you so ungenerous? Is it so difficult for you to accept my help?”

“Doesn’t it depend on the form it takes? Pushing me to do what I wasn’t ready for is a strange form of help. I was fourteen when you sent me to that girl and she wasn’t just some celebratory rite of passage, was she? She had a specific purpose. She was an agent. An agent to cure me of exactly what I’m not sure. Couldn’t you have given me the chance to cure myself? What was the rush? Couldn’t it have waited until I was ready?”

“I did what any father would have done.”

“Really? Did your father do for you what you did for me?”

“I don’t want to talk about this any more. This conversation is over. I’d just like to ask you to reflect on it some more when you’re not so angry. Try and see it from my perspective. If you can, I think you’ll feel differently about it. I was certainly not trying to hurt you. You misunderstood. I did my job. Now do yours and grow up already!”

He had never been so pleading and rash at the same time. For a minute, I was frozen in place after he left the room. Maybe he was right. Maybe that was exactly what I needed to do but I had the hunch that I had already done most of it.

I went up to my room and gathered my books and clothes in a jumble and threw them in my backpack. I was ready to leave my home behind me: its comforts as much as its anguish. Then I called and waited until the taxi came and when I sat on the crinkly back seat headed to the Ossining train station, I felt a dynamic element inside me, a harmonious combination of lightness and weight that was as new to me as my liberated body had felt the day before.

Excerpted from The Skinny: A Memoir, by Jonathan Wells (Ze Books, August 17, 2021). Reprinted with permission from Ze Books.

Lithuania says throw away Chinese phones due to censorship concerns