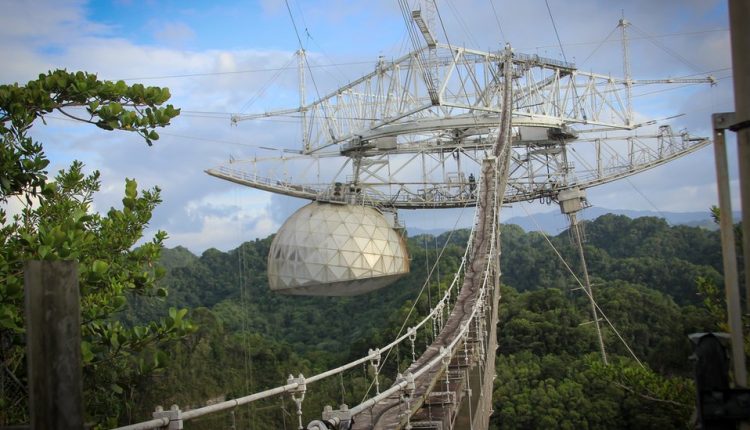 Iconic radio telescope in Puerto Rico is at risk of collapsing

One of the world’s most venerable radio telescopes is on the brink of catastrophe, triggering a frantic race by engineers at the Arecibo Observatory in Puerto Rico to save it after two critical cables supporting a 900-ton equipment platform broke.

The platform, held aloft over a massive dish by cables strung to towers, must be quickly stabilized, or it could crash to the ground and destroy the telescope. With the loss of these two cables, the remaining cables are under increased strain, and it’s uncertain whether rescue efforts will be successful.

“For me, it’s probably fifty-fifty,” says former observatory director Michael Nolan, now at the University of Arizona. “They are doing what can be done. I’m still really worried that they can’t do enough. If we’re worried about it falling, nobody should go up there or be there when it happens.”

Suspended from three towers, the telescope’s platform hovers some 500 feet above the thousand-foot-wide dish. In August, an auxiliary cable slipped from its socket and plummeted into the dish, carving a 100-foot-long gash into its reflective panels. Before crews could repair that cable, another one attached to the same tower ruptured on November 6. This second broken cable is one of four primary ones connecting that tower to the platform.

“I was not that worried when the first cable failed because I was confident that it would take a few months to fix,” says Abel Méndez, an astronomer at the University of Puerto Rico at Arecibo who frequently observes with the telescope. But Méndez says he was stunned when the second cable failed. “Now I’m worried.”

Arecibo has played a crucial role spotting planets beyond our solar system, searching for extraterrestrial civilizations, and studying asteroids and other worlds closer to home. Today, scientists use the telescope to study powerful blasts of energy called fast radio bursts and to spy ripples in the fabric of space-time produced by colliding galaxies.

Each of the observatory’s towers has four primary cables, but only two are required to keep the platform aloft—assuming they’re in decent shape. Tower four (named because it’s at the four o’clock position if noon is north) is now down to just three primaries. If another one of those cables fails, it’s unclear whether two aging cables will be able to hold the platform.

“It’s an ugly situation for sure,” says Frank Drake, a former Arecibo director (and my father). “When you have cables breaking like that, it could precipitate at any moment a chain reaction with more cables breaking, and the whole thing falling down.”

That would be a huge blow for ongoing science observations—and for Puerto Rico, where the observatory is a source of pride, providing jobs, attracting tourists, and sharing resources with surrounding communities, especially during emergencies such as Hurricane Maria.

Multiple engineering firms and the U.S. Army Corps of Engineers are on the ground assessing the jeopardized platform, while daily drone inspections provide updates on the cables. The teams are exploring ways to stabilize the structure, including removing some weight from the platform using helicopters, removing tension from the system by lowering the platform, and reattaching the fallen auxiliary cable, which is still largely intact after slipping from its socket.

“We’ll probably know fairly soon if they can come up with a Band-Aid, take some of the tension off, take away the immediate problem so we can solve the big problem,” Nolan says.

In the 1960s, engineers built Arecibo’s mammoth radio dish in one of Puerto Rico’s natural sinkholes. An overhead, triangular equipment platform helps aim the telescope at different parts of the cosmos. That platform is packed with receivers, line feeds, and a complex reflector system that precisely focuses radio waves—and it’s where James Bond fought Alec Trevelyan in 1995’s GoldenEye.

Although it might look small relative to the dish, the suspended structure is truly massive—a small house could easily fit inside the dome housing the reflector system.

The platform is held up by 18 thick, steel cables strapped to three concrete towers, the tallest of which measures 365 feet. In addition to the four primary cables on each tower, two auxiliaries per tower were installed in the 1990s to help stabilize the structure and bear additional weight.

Observatory staff regularly inspect the towers, cables, and platform, looking for any signs of weakening or corrosion caused by the salty, tropical air.

“There’s nothing worse, corrosion-wise, than salt fog,” says Dennis Egan, an engineer at the Green Bank Observatory in West Virginia. “It’s better to be underwater.”

Those inspections have turned up some evidence of popped strands in the cables, a problem that Nolan suspects could have been exacerbated by Hurricane Maria and a recent swarm of sizable earthquakes. But they found no indications of widespread weakening or impending failure. In a Q&A posted on Facebook, Arecibo’s director, Francisco Córdova, said the rupture was unexpected and indicative of structural degradation.

The observatory “is 50 years old, and there’s never been a situation where suddenly a whole bunch of different strands are breaking,” says Drake, who famously sent a message into outer space from the observatory in 1974. “I would not want to be on that thing now. There’s no escape. You’re just stuck.”

If tower four fails, the platform could either crash through the dish or make a pendulous swing into a nearby cliff. Without the platform’s weight keeping the towers balanced, it’s possible all three could topple into the surrounding jungle.

If engineers can stabilize the structure, they could then repair or replace some of the aging cables. Two new cables are already on order, Córdova said on Facebook, due to arrive at the observatory in December.

But to replace the cables, workers will need to go up onto the platform. “They’ve got to do something to verify that the existing cables are correct and undamaged, in a way that doesn’t endanger people on the structure,” Drake says.

A scientific and cultural icon

The Arecibo Observatory has faced a number of challenges in recent years, including threats from the National Science Foundation to yank funding. But scientists and the surrounding communities rallied, and the University of Central Florida stepped in to manage the embattled observatory.

Now, many are wondering whether NSF will help Arecibo through this emergency. According to Córdova’s social media post, NSF is reviewing a request for $12.5 million in repair funding.

“NSF is in communication with Arecibo. We are monitoring the situation and considering all possible options to expedite stabilization of the structure,” the agency said in a statement. “Our highest priority is the health and safety of the Arecibo staff.”

Despite its current trouble, the observatory has had a long and storied history, occupying a place of pride among scientists and Puerto Ricans.

“It has ingrained itself in our culture in Puerto Rico, in the fabric of our daily lives,” says Edgard Rivera-Valentín of the Lunar and Planetary Institute, whose grandfather helped build the telescope. “I definitely have this memory of being shocked by this huge instrument, right here, and getting to know that people in my city were doing all these really cool things,” Rivera-Valentín says. “I’m in science because I grew up close to the observatory.”

Discoveries from Arecibo include the 1974 detection of a pair of whirling pulsars that are emitting gravitational waves—earning the 1993 Nobel Prize in Physics—and the first confirmed planets spotted orbiting a star other than the sun in 1992. Scientists at Arecibo also worked out Mercury’s rotation rate, spotted a repeating fast radio burst, and conducted numerous searches for communicative extraterrestrial civilizations—an endeavor popularized by Carl Sagan’s novel Contact that was later made into a movie of the same name.

In addition to observing the heavens and collecting radio waves, Arecibo is also an extremely powerful radar. Scientists use this capability to characterize asteroids that cross Earth’s orbit, calculating their positions with extreme precision to figure out how to avoid future collisions. And in 1974, Dad used it to send an interstellar message to a clump of stars called the Great Cluster in the Hercules constellation. In it, he encoded information about humans, Earth, the solar system, and Arecibo, and broadcast it during a celebration of upgrades to the telescope.