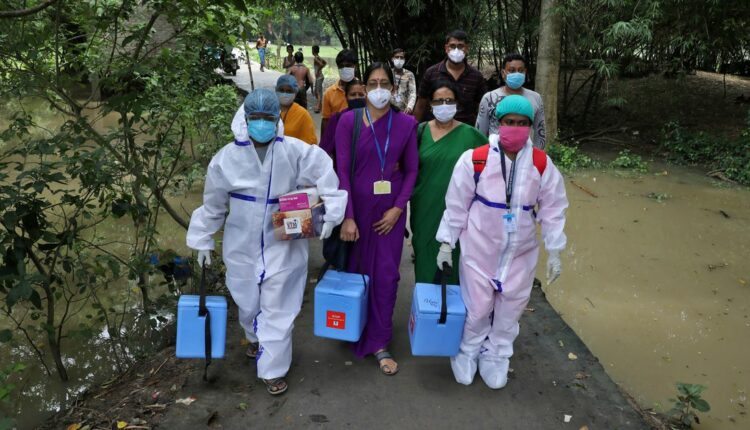 NEW DELHI, June 27 (Reuters) – India’s Prime Minister Narendra Modi urged people on Sunday to overcome their hesitancy and get COVID-19 vaccinations as soon as possible, as concerns grow about the highly infectious Delta variant being detected in some states.

After a fall in infections from May’s daily peak of 400,000, India has redoubled its efforts to inoculate the country’s 940 million adults amid supply constraints and fears of a third wave of pandemic.

“Get vaccinated,” Modi said in his monthly radio address, urging the public to adhere to social distancing and wear masks. “That is a good safety shield. Think about that.”

India must administer 10 million doses a day to achieve its aim of inoculating all adults by December, experts say. But the country has fully vaccinated fewer than 6% with two doses.

Interacting with some villagers in a virtual meeting, Modi asked community leaders to foster awareness among villagers about the benefits of vaccination and curb rumours about ill effects.

He said this month the government would buy 75% of all vaccines from drugmakers and distribute them for free to states, which along with private hospitals had been buying shots for people aged 18 to 45.

India’s daily COVID-19 infections rose by 50,040, while the death toll rose by 1,258, including 511 deaths in the state of Maharashtra, health ministry data showed.

The country has scaled back its estimate of vaccine supplies to 1.35 billion doses between August and December from an earlier estimate of nearly 2 billion doses, according to an affidavit filed with the Supreme Court on Saturday.

However, the government told the court it was committed to its vaccination target and was in talks with global suppliers like Pfizer Inc (PFE.N), Johnson & Johnson (JNJ.N) and Moderna Inc (MRNA.O) for additional supplies.

New variants are a particular concern in India, where more than half the population has not had even a single vaccine dose.

At least 20 cases have been found linked to the Delta variant, which India last week designated a variant of concern, according to the health ministry. read more

India’s official death count is now 395,751, but experts and global health agencies such as the World Health Organisation believe the toll may be much higher. Of the 35.51 million people infected, 29.25 million have recovered.

State governments eased lockdown restrictions this month after a fall in cases, but scientists fear that the presence of the Delta variant, which was first detected in India, and the slow pace of vaccination could trigger another wave of infections.