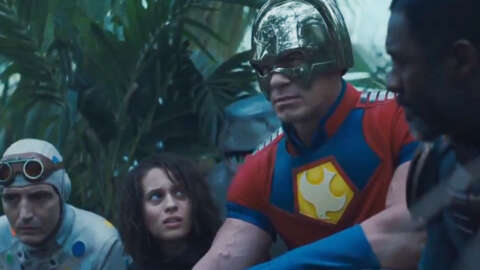 The Suicide Squad director James Gunn has revealed a new trailer for the upcoming August film. And while the first trailer was a laugh riot, the newest Suicide Squad trailer is a bit more serious.

According to Gunn, he didn’t want to give people the same thing over and over again, which you can see when you check out the trailer for yourself below. “That bugs me when they do that,” Gunn said in a tweet. “If we’re going to ask fans to watch TWO, let’s give them a reason to do so, focusing on different aspects of our film.”

Although it’s April Fool’s, the only joke here is on the supervillains who agreed to work for Amanda Waller. Brand new #TheSuicideSquad trailer which dropped last night exclusively in theaters! Meet us in theaters August 6! pic.twitter.com/FwbtANOXEX

The Suicide Squad will arrive in theaters and on HBO Max on August 6. Various promotional videos have been arriving online and on TV for the film, four months prior to the release. We can expect to see even more in the upcoming months leading to the film’s release.

The movie stars Margot Robbie as Harley Quinn, Jai Courtney as Captain Boomerang, Joel Kinnaman as Rick Flag, and Viola Davis as Amanda Waller–all of whom are reprising their roles from David Ayer’s 2016 Suicide Squad movie. New to the cast are are Idris Elba as Bloodsport, John Cena as Peacemaker, David Dastmalchian as Polka-Dot Man, Sean Gunn as Weasel, Sylvester Stallone as King Shark, Michael Rooker as Savant, and Peter Capaldi as Thinker. The film follows a group of supervillain convicts who are given the chance to take time off their sentences by completing various impossible tasks–or suicide missions.

One thing comic book fans have noticed is that King Shark looks quite a bit different in the upcoming movie, as he isn’t a hammerhead shark anymore. “I did tests with the hammerhead design, which I love & originally thought I’d use,” explained Gunn. “But having eyes on the sides far apart made it incredibly awkward shooting interactions with other people. You couldn’t really see him looking at the other person & the shots tended to be too wide.”