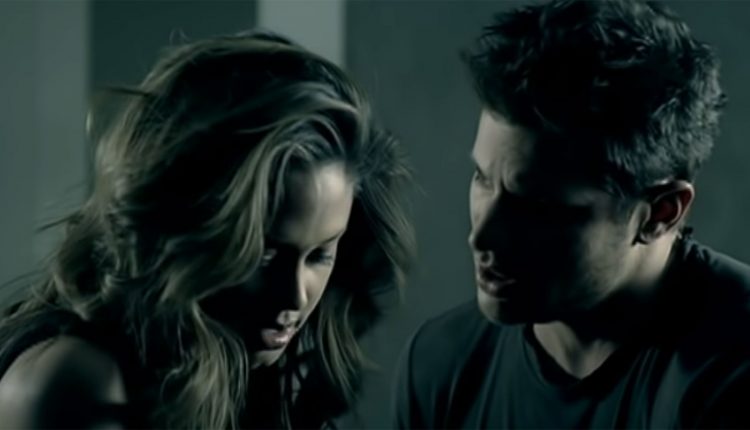 Hitting her where it hurt. Jessica Simpson recalled watching Nick Lachey’s music video for “What’s Left of Me” with him shortly after their split.

“He showed it to me,” Simpson, 40, said in a sneak peek of the Friday, March 26, episode of Tamron Hall. “I opened my doors back to him one night out of weakness.”

The designer noted that it was “really wrong” of her to let him back in after she filed for divorce in December 2005.

“I opened my doors back up to, I don’t even know, to see if it was better a year later, months later,” she explained. “And then he showed me this. I think he had a TV show or something.”

The track’s visual, which was part of Lachey’s 2006 album, What’s Left of Me, featured his now-wife, Vanessa Lachey, whom he met on the music video set.

“It was literally all the songs that he was writing while we were together,” Simpson said. “So, I mean, I think he hated me if he’s saying ‘I Can’t Hate You Anymore.’”

The “Take My Breath Away” singer opened up about the ups and downs in her relationship with the 98 Degrees singer, 47, in her memoir, Open Book, which was released in February 2020.

The pair wed in October 2002 and split three years later in November 2005. Simpson revealed that while fans watched their fairy-tale romance play out on MTV’s Newlyweds: Nick and Jessica for three seasons, their offscreen romance was anything but perfect.

“I had the Instagram-girlfriend syndrome before it was a thing, and I wanted the world to see my husband in the best light because I was hopelessly in love with him,” she wrote in the book, noting their marriage crumbled as her career began to overshadow Nick’s success.

The mother of three, who shares Maxwell, 8, Ace, 7, and Birdie, 2, with husband Eric Johnson, noted that she didn’t know what to do when her career took off and Nick’s didn’t.

“I didn’t want to outshine him, because that just wasn’t what I knew,” she wrote. “He seemed so much older than me, my guide in everything. I want him to feel like he could show me all that he knew — about the business, about the world.”

Simpson added that “divorce is messy,” claiming that Nick had a harder time with letting go after she told him she wanted out.

“I wish we were the kind of people who could divorce and stay friends. We weren’t, and I regret that my actions hurt him,” she wrote.

The bestselling author announced the release a new paperback version of her memoir earlier this month, which includes diary entries from her past and a fresh introduction.

In one diary page, she detailed how sad she was when she learned the boy bander had moved on with Vanessa, 40, whom he later married in 2011.

“So, Nick, you’re with another already?” Simpson wrote in the diary passage. “Seems that you forgot the love you spoke to me.”

She added: “I’m saddened beyond belief. Alone in the dark, with no one to call my own.”

Nick, who shares three children, Camden, 8, Brooklyn, 6, and Phoenix, 4, with Vanessa, previously told Us that he had “not read a single word” of his ex’s book. He also claimed in February 2020 that Simpson did not reach out before it was published.

The paperback edition of Open Book is available now.

Horses at this non-profit help kids heal from emotional trauma