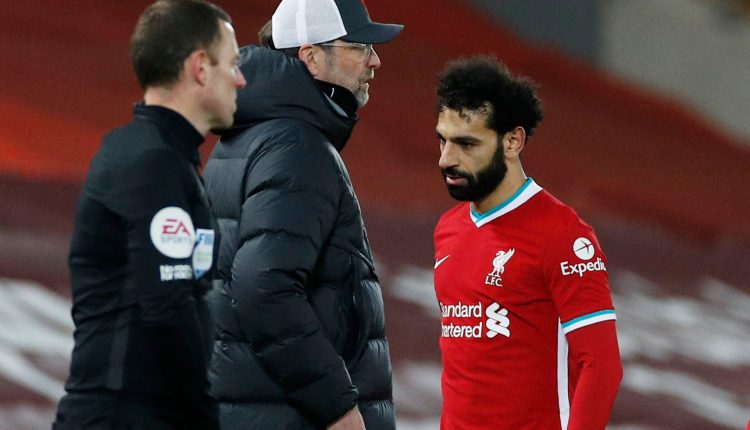 Jurgen Klopp claims he had concerns over Mohamed Salah suffering from fatigue during Liverpool’s defeat to Chelsea on Thursday evening.

Mason Mount’s goal in the first half was enough to secure a 1-0 win for Thomas Tuchel’s side at Anfield.

And with Liverpool chasing an equaliser in the second half, Klopp took the surprise decision to replace Salah with Diogo Jota after just 62 minutes.

Salah was clearly unhappy with Klopp’s call as he shook his head on Liverpool’s bench.

The Egypt international’s agent also angered Liverpool fans with his reaction to the substitution on Twitter.

But Klopp believes Salah was showing clear signs of tiredness and feels the forward ‘suffered’ whilst on the pitch against Chelsea.

When asked to explain his decision to substitute Salah, Klopp told Sky Sports: ‘I just brought on flesh legs.

‘Mo looked like today, it’s not very often… he suffered a bit, he played a lot of games. I could have taken off Sadio or Bobby, that is all clear but at that moment it looked like Mo suffers the most.

‘Oxlade trains really well so you have to respect that as well and to show that you see it, these kind of things.

‘Milly [Milner] trains really good, we could not accept a second goal, we were not compact enough so that’s why we brought on Milly, wake them all up.

‘From a football point of view of course we could have brought Naby [Keita] that’s clear as well. But it was a little bit about keeping them in the game because we needed one situation. But if you let them run through one or two times more often then we are 2-0 down and we do not have to think about it any more.’

In a separate interview with the BBC, Klopp said: ‘In that moment he looked like he felt the intensity tonight and I didn’t want to risk it.

‘It’s all fine, I make decisions that I think are right in the moment.’ WandaVision season 2: Will there be a second series on Disney Plus after finale?

WandaVision episode 9: Will there be a secret episode 10 after big finale?